Goodreads synopsis:
Who do you trust when you discover your whole life has been a lie?

Cal thinks he's losing his mind when cracks start appearing that no one else can see. But his life splinters apart when he discovers that, far from leading an ordinary life in a northern town in 2012 as he thought, he has spent his whole life so far in a deliberately induced coma. The year is actually 2024 and a repressive regime is in force: it plans to brainwash the whole population. Set free by the local resistance movement, he finds himself drawn into their struggle; and he gets involved with Kyla, a girl who lives on the streets. But are they all just using him: is there anyone he can really trust? 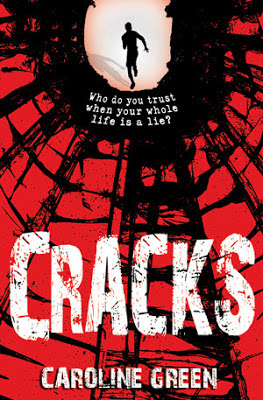 Review:
'Cracks' is a dystopian novel by British author Caroline Green.  I was thrilled to be sent a copy to review as even though I haven't read anything by Green before I loved the sound of this book which is set in 2024 where society is very different from that which we live in now.  The Securitat are now in charge and are determined to quash any resistance to the regime.  The way they plan to do this is extreme and frightening and forms the basis for the experiences undergone by the main character Cal.

The story is split into three distinct sections.  I'll admit that I initially found the first part rather puzzling but as the second part started everything became much clearer and I began to see how things were going to fit together.  I would have preferred it if the introduction had been slightly less disjointed and at times I was confused about how this was going to have any link with the rest of the book but as Cal began to make sense of things, so did I.

I was fascinated by some of the ideas incorporated into the story and I enjoyed reading about the changes that society had undergone.  There could perhaps have been a little more world-building and I would have liked to have seen some of the details discussed expanded on more, but on the whole it was depicted as being quite terrible and bleak for those living in it.  I sincerely hope that 2024 does not turn out to be anything like Green describes here!

The tension builds throughout the book and I ended up enjoying the second half a lot more than the first.  There are lots of challenges for Cal to face and plenty of ups and downs in store for him and the other characters.  An enjoyable dystopian thriller, 'Cracks' is a roller coaster ride of thrills and spills with lots of surprises lying in wait for the reader.
Posted by Samantha (A Dream of Books) at 00:00