Goodreads synopsis:
Tania's heart belongs to Orlando. Nothing can rip them apart. Until the seduction begins in a flurry of glamour and magic, music and parties all orchestrated by the mysterious and mesmerising Zoran, an iconic rock star who has retired to a remote ranch in the nearby mountains. And there Tania meets the dark side. Can she resist temptation? 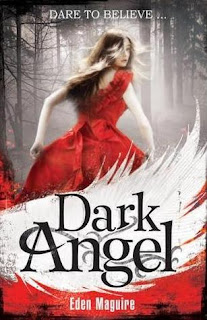 Review:
Eden Maguire is the bestselling author of 'The Beautiful Dead' series.  I have to say that I wasn't a huge fan of these books (although I might give them another try) but when I saw the cover of 'Dark Angel' and read the synopsis, I knew that I wanted to read it.  I'm a sucker for a pretty cover and this one is gorgeous!  Plus the story sounded really intriguing so I got started on it as soon as it arrived.

The story centres around main character Tania, who seems to live a pretty charmed life.  She has fantastic friends, a gorgeous boyfriend called Orlando and parents who treat her like an adult and give her the freedom to make her own decisions and choices about her life.  One night, Tania, along with her best friends Grace and Holly attend the party of well known rock star Zoran Brancusi.  The party is wild, their host hypnotic and at the end of the night they return home with strange gaps in their memories.  From that moment on everything seems to change as they're sucked into Zoran's mysterious world.  Only Tania may have the necessary strength in the forthcoming fight against an evil presence which seems to have penetrated their world.

I loved the mystery which surrounded Zoran and co.  At no point did I guess their secret or even have an inkling about the direction in which the story was going to go.  Some of the events throughout took me completely by surprise and kept me on my toes and I enjoyed seeing the plot twists and turns unravel up to the point of a completely epic conclusion to the story.  This was definitely not another formulaic paranormal romance.

Eden Maguire has a really fast-paced and engaging writing style which kept me immersed from the word go.  Some parts of the book had me on the edge of my seat and I was totally gripped by Tania's story which really has something for everyone.  There's a swoonworthy romance, a battle between good and evil, magic and mystery and a fantastic heroine who must make some major decisions to save not only herself but the lives of her friends and family.

I would just say that there are some adult themes in this book, so I think it's more suited to slightly older teen readers.  I thought that overall 'Dark Angel' was a fantastic read.  I curled up in my favourite chair to start this one evening and found myself finishing it in one sitting because it was that good!

The second book in the series, 'Twisted Heart' is due out on 3rd November and I'm looking forward to revisiting Tania once more and seeing what will happen to her next.
Posted by Samantha (A Dream of Books) at 00:00