Goodreads synopsis:
For the bright young things of 1929, the beautiful days seem endless, filled with romance and heartbreak, adventure and intrigue, friendship and rivalry.

After a month in New York, Cordelia Grey and Letty Larkspur are small-town girls no longer. They spend their afternoons with Astrid Donal at the Greys’ lush Long Island estate and their nights in Manhattan’s bustling metropolis. But Letty’s not content to be a mere socialite. She is ready at last to chase her Broadway dreams—no matter the cost.

Cordelia is still reeling from the death of her father at the hands of Thom Hale, the man she thought she loved. Now she is set to honor Darius Grey’s legacy . . . and take her revenge.

Promised to Cordelia’s half brother, Astrid is caught up in a world of dazzling jewels and glittering nights—and the sparkle is blinding. Charlie Grey is a gangster playing a dangerous game; and for Astrid, Cordelia, and Letty, the stakes could be deadly. 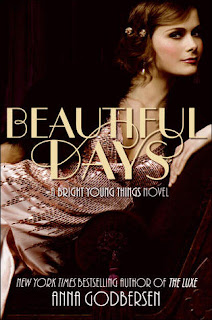 Review:
This is the second book in the Bright Young Things series by Anna Godbersen which is set in the jazz age of the 1920s.  This is a decade which I love!  Flappers, bootleggers, fringed dresses and jazz music all feature to help set the scene for this particular period in time and Godbersen's wonderful prose and gorgeous descriptions combine to transport the reader back to 1929.

The roaring twenties are often seen as a glamorous decade with gorgeous fashions, decadence in abundance and where decisions are no more important than where to be seen and what to wear.  However, one of the things I love about this series is that although we are shown the glamour, wealth and privilege of many of the families in the book, the emptiness and shallowness of the lives that characters such as Astrid in particular are living is also depicted.  This is particularly echoed by Letty who has spent an idle and empty summer with Cordelia.  Gradually she begins to realise that she has begun to let her dreams slip away and that if she truly wants to become a star then she must create her own luck and work her way up to the top.

Although Cordelia was my favourite character in the first novel, I really warmed to Letty in 'Beautiful Days'.  Her story is full of ups and downs as she tries to fulfil her dreams to star on Broadway.  She also has the chance at a real romance but even with this things don't go smoothy for her.  I found that I could identify with her the most out of the three girls and I enjoyed seeing her personality develop further and see her struggle to become something and make a name for herself.

All three of the main characters have numerous romantic entanglements.  I must admit that I've always found something slightly sinister about the relationship between Astrid and Cordelia's half-brother Charlie.  Their relationship has progressed a step further by the end of the book but I feel like there's a continual threat of something going terribly wrong between them.  Their romance is incredibly tempestuous so it will be interesting to see whether they're still together by the end of the series.  Cordelia is still recovering from her betrayal in the first book so she starts to put business first and pleasure second although she too forms a romantic attachment in the form of a handsome pilot.

One of the things I love about this series is that it may be set in the past, during a period of history which I find absolutely fascinating, but all the girls are dealing with situations which are still relevant today.  They get their hearts broken and their dreams dashed just like modern girls.  Anna Godbersen is currently working on the next book in the series and I can't wait to see what's going to happen to all the characters next.
Posted by Samantha (A Dream of Books) at 00:00