Goodreads synopsis:
Jael has always felt like a freak. She’s never kissed a boy, she never knew her mom, and her dad’s always been superstrict—but that’s probably because her mom was a demon, which makes Jael half demon and most definitely not a normal sophomore girl. On her sixteenth birthday, a mysterious present unlocks her family’s dangerous history and Jael’s untapped potential. What was merely an embarrassing secret before becomes a terrifying reality. Jael must learn to master her demon side in order to take on a vindictive Duke of Hell while also dealing with a twisted priest, best-friend drama, and a spacey blond skater boy who may have hidden depths. 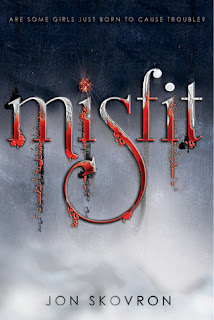 Review:
The concept of 'Misfit' is one that sounded really appealing to me prior to actually reading the book but on finishing this title I'm not sure if it completely managed to win me over although it gave it a good shot. The story centres on Jael, a teenager who is half-demon and half-mortal.  She lives with her father and has spent most of her life running from something she doesn't really understand.  She only knows that her father never lets them stay in the same place for long.  When Jael turns sixteen she finally gets the opportunity to explore and embrace her demon side but as a half-breed, a powerful demon wants her dead and she may not be able to stop him.

I liked the main character of Jael and I found that she had a really interesting personality which drew me into her story.  Being half-demon is a lot for one teenager to handle but she faces this head-on and I enjoyed seeing her discover and grow into the powers and abilities that she has.  She's pretty spirited and feisty and I liked the way she was determined to lead a normal life at high school as well as taking on the job of defeating evil demons.  There's romance for her too in the shape of skater boy, Rob who I found incredibly sweet and cute and I liked the way in which they started off as friends and their romance gradually developed throughout the book.

I also enjoyed some of the chapters exploring the history of Jael's family, more specifically the relationship between her mother and father, but although this was interesting, I did sometimes find that these interspersed passages occasionally broke up the flow of the narrative and took the focus away from Jael herself.  Similarly, the story itself was told using a third-person narrative which didn't completely work for me.  I would have liked to have seen events more through Jael's eyes, instead of feeling slightly distant from what was happening.

There is quite a strong religious element to the book too and a proportion of the story takes place in Jael's Catholic school.  There's also talk of things like exorcisms, which may not appeal to all readers.

This is a paranormal story featuring mythology, demons and otherworldly creatures and exploring hell in all its glory.  It's quite different from most other books I've read in this genre but was quite slow to engage me and didn't have that wow factor which normally makes me fall in love with a book.  That aside, this was still an interesting read which those who are looking for something different may like to try.
Posted by Samantha (A Dream of Books) at 00:00