Goodreads synopsis:
Taro - A Japanese fisherman's son and silent assassin trained in the arts of death - is back in a second thrilling novel of ancient curses, epic battles, scheming warlords,and blood-sucking ninjas. 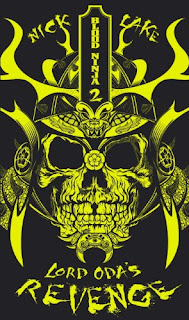 Review:
This is the second book in the Blood Ninja series by Nick Lake.  I thoroughly enjoyed the previous installment so started this one soon after.  It picked up straight after the events of the first book and as the background and characters had already been established, it was straight back into the action, rejoining Taro and co.

One of the things I really like about this series is that it portrays an epic struggle between good and evil.  Lord Oda is pretty much evil personified and is truly bone chillingly bad.  He's an awesome nemesis for Taro who also has to face an enemy in the form of Yukiko.  She's determined to avenge her sister's death and has become consumed by thoughts of revenge.  She appears even more threatening because as a young girl she's as far removed from a deadly killing machine as you can get.  However, she's no longer who she once was and can think of nothing but bringing her sister's killer to justice.  Because of this she's depicted as an even bigger threat to Taro's existence.

Nick Lake has obviously done incredible amounts of research into Japanese culture, the ninja way of life and also the religious and spiritual beliefs and philosophies which are described in the book.  There is an amazing amount of detail about all of these things and they really enrich the overall story.  I love reading about the country of Japan and found this a wonderful setting.

There are subtle romantic undertones in some chapters in the book, as Taro and Hana are drawn closer together. The romance between them is a periphery element of the plot however, rather than being the main focus.  Personally, I'd like to see this being developed further as the series progresses.

Fans of the series won't be able to resist grabbing this new installment of Taro's story.  For those that haven't discovered Nick Lake's writing yet then I would definitely recommend trying these.  Teenage boys in particular will be drawn to the idea of a ninja who's also a vampire!
Posted by Samantha (A Dream of Books) at 00:00