Goodreads synopsis:
Having solved the matter of the Radiant Boy, Riley, Buttercup, and Bodhi are enjoying a little time-off. But then Riley encounters a young ghost named Rebecca. Despite Rebecca's sweet appearance, Riley soon learns she's not at all what she seems. As the daughter of a former plantation owner, Rebecca is furious about being murdered during the slave revolt of 1733. Her uncontrollable anger is keeping other ghosts, who also died in the revolt, trapped in a shimmering bubble. And when Bodhi and Buttercup inadvertently fall into Rebecca's trap, Riley is the only one who can save them. 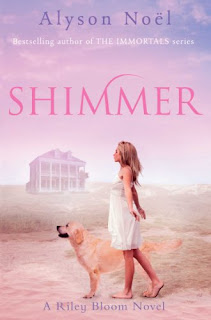 Review:
This is the second book in Alyson Noel's series based around a periphery character from her bestselling Immortals books.  I loved 'Radiance' so I couldn't wait to get started on this one as soon as it arrived.  I think the cover is gorgeous too!  The pink and purple colours are really pretty and I adore the fact that Buttercup, Riley's dog, gets to feature on the cover as well.  He's really sweet!

Riley is a soul catcher; tasked with guiding those spirits who refuse to cross over to the Here and Now.  In 'Shimmer' she finds herself having to save Bodhi and Buttercup and free a number of lost and trapped souls.  Some of the incidences in the book are based around the 1733 slave revolt on the Danish Island.  I thought that the way Noel had incorporated elements of real life historical events was very clever as this added another dimension to the story.

Throughout the book, Riley learns more about the Here and Now and discovers that she may eventually get her wish to turn thirteen.  How this will happen is something that I'm  looking forward to learning more about.  I also enjoyed discovering a little more about Riley's guide Bodhi and I hope in the future that further information surrounding his past life will be revealed.  He's quite a complex and intriguing character and whereas Riley is often an open-book, he seems to have a lot of layers to his personality.

I'm a big fan of this series.  It's designed for slightly younger teen readers and trust me, you can't help but fall in love with Riley and her sweet and adorable Labrador, Buttercup.  One of the things I love the most about it is that the books are so mystical and magical.  I really like Alyson Noel's version of the afterlife and the fact that in her vision, death isn't the end and life really does go on and on.  I also liked the message that was conveyed in this story about forgiveness and how by forgiving those around you and letting go, you can finally move onto a better future.

The next book in the series is called 'Dreamland' and is out later this year.  I'm going to be counting down the days!
Posted by Samantha (A Dream of Books) at 00:00