The Black Banner by Helen Hart, published by SilverWood Books on 21st June 2011

Goodreads synopsis:
Set sail on the high seas of adventure with Becky Baxter and her band of pirates! A swashbuckling pirate novel for young teens. Penniless Becky Baxter crops her hair, dresses in breeches, and leaves the dangerous backstreets of Bristol for a life of adventure and fortune on the high seas. But she quickly discovers that there are far more dangerous enemies than her drunken Ma and evil Mr Crudder… Pirates! 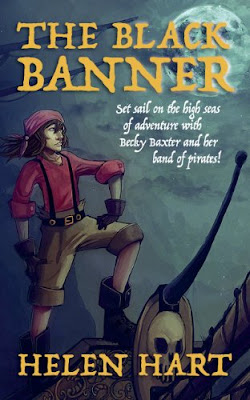 Review:
How can you resist a book which features pirates, swashbuckling adventures on the high seas, adventure and excitement?  The answer is you can't, which is why I enjoyed 'The Black Banner' so much.

Set in 1719, thirteen year old Becky pretends to be Billy Baxter so that she can escape from her mother and their squalid existence.  Disguised as a boy, she signs up as a ship hand on the Bonny Marie.  When the ship is attacked by pirates, it looks like the adventure might be over but it's really only just beginning as Becky becomes a pirate on the high seas and must draw upon every ounce of bravery and determination she has to survive.

One of the things I loved the most about this book was the vivid descriptions and imagery which conjure up the experience of being at sea: the salty spray of the sea, the heat of the sun, the rocking of the ship and the excitement of looting and plundering other ships' cargoes.  I felt swept away by the story and could easily imagine myself in Becky's place, transported back in time.

The story is told in the format of journal entries by Becky herself as she encounters all kinds of dangers on her voyage.  I loved all the characters that she meets along the way, such as Captain Scabrill, carpenter's mate Zac Price, friendly and kind Welshman Tarron Jones, Mary and Anne, fellow female pirates and the kindly Jonquil.  These people are like a second family to Becky and are wonderfully described and imagined.

What was interesting as well was discovering what the pirates' lives were actually like as Helen Hart weaves a fascinating tale combining historical details of the eighteenth century.  You can tell that a lot of research has been done into this particular time period and this adds an extra layer of richness to the story.

This book will definitely appeal to female readers who know that anything boys can do, girls can do just as well.  It will also be a big hit with boys who have always dreamed of becoming a pirate.  For those that love films such as 'Cutthroat Island' and 'Pirates of the Caribbean' then this book will also be instantly appealing. I've always loved pirate adventures, so I found this was a cracking read featuring pirate ships and hangings, an adventure at sea, plus plenty of danger and excitement.  'The Black Banner' has it all as we join Becky Baxter on the adventure of a lifetime. 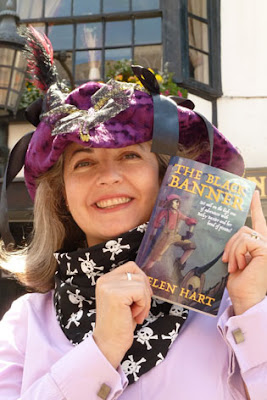