The Warrior Heir by Cinda Williams Chima, published by Indigo on 1st September 2011

Goodreads synopsis:
Before he knew about the Roses, sixteen-year-old Jack lived an unremarkable life in the small Ohio town of Trinity. Only the medicine he has to take daily and the thick scar above his heart set him apart from the other high-schoolers. Then one day Jack skips his medicine. Suddenly, he is stronger, fiercer, and more confident than ever before. And it feels great - until he loses control of his own strength and nearly kills another player during soccer team tryouts. Soon, Jack learns the startling truth about himself: he is Weirlind - part of an underground society of magical people who live among us.

At the head of this magical society sit the feuding houses of the Red Rose and the White Rose, whose power is determined by playing The Game - a magical tournament in which each house sponsors a warrior to fight to the death. The winning house rules the Weir. As if his bizarre magical heritage isn't enough, Jack finds out that he's not just another member of Weirlind - he's one of the last of the warriors - at a time when both houses are scouting for a player. Jack's performance on the soccer field has alerted the entire magical community to the fact that he's in Trinity. And until one of the houses is declared Jack's official sponsor, there are no limits to what they'll do to get Jack to fight for them. 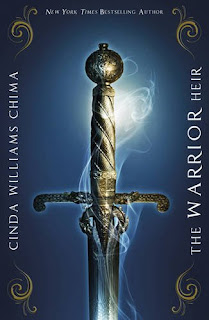 Review:
Originally published in 2006, 'The Warrior Heir' has been re-published by new YA imprint Indigo, allowing the book to be brought to a whole new audience of readers.  I've never read anything by Cinda Williams Chima before so I was looking forward to trying something by a new author.

The story centres on 16 year old Jack who was destined to become a wizard before his fate was changed forever.  When he discovers that he's Weirlind, an underground society of magical people who live among humans, it's a huge shock but even more astounding is that he's also a warrior - one of the last remaining warriors who are coveted by the magical houses.  The White Rose and the Red Rose both want to get their hands on Jack but he's determined not to give up without a fight.  I enjoyed Jack's journey in the book and his gradual awakening to who he really is.  Not only does he have to try to come to terms with being part of a magical society but he also has to cope with learning the truth about the people in his life and why they've concealed his true heritage for such a long time.  The history of the Weirlind was extremely fascinating and I liked the back story at the very start of the book which helps to establish some important information about Jack's ancestors.

I actually have quite mixed feelings about this title.  Although the book was heavy on adventure and action, I did find it a little slow going in places.  It was very heavy on the fantasy and sometimes I found that the characters seemed to take a backseat to the rather complex magical world that Williams Chima has conjured up.  This meant that I didn't completely feel engaged with Jack and his family. The plot also seemed too predictable and whereas I felt like I should have been shocked and amazed by the storyline, I actually found that it was easy to guess what was going to happen next.  I almost gave up on the book part way through but I'm glad I carried on reading because the second half of the story was definitely better than the first and the ending was exciting.

Fans of the fantasy genre will probably enjoy this but I didn't find it entirely to my taste.  I wanted it to grab my attention and keep me glued to the pages but more often than not I kept thinking instead about what I was going to read next.  I have read some reviews of 'The Warrior Heir' which rave about it, so there's definitely an audience out there that will love it, but sadly it just wasn't for me.
Posted by Samantha (A Dream of Books) at 00:00