Goodreads synopsis:
Bridget Duke is the uncontested ruler of her school. The meanest girl with the biggest secret insecurities. And when new girl Anna Judge arrives, things start to fall apart for Bridget: friends don’t worship as attentively, teachers don’t fall for her wide-eyed “who me?” look, expulsion looms ahead and the one boy she’s always loved—Liam Ward—can barely even look at her anymore.

When a desperate Bridget drives too fast and crashes her car, she ends up in limbo, facing everyone she’s wronged and walking a few uncomfortable miles in their shoes. Now she has only one chance to make a last impression. Though she might end up dead, she has one last shot at redemption and the chance to right the wrongs she’s inflicted on the people who mean the most to her.

And Bridget’s about to learn that, sometimes, saying you’re sorry just isn’t enough.… 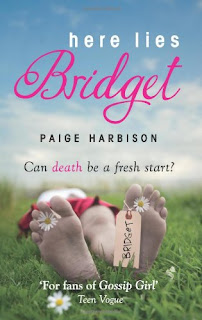 Review:
‘Here Lies Bridget’ is the debut book from new YA author Paige Harbison, daughter of best-selling author Beth Harbison. I didn’t know much about it beforehand except that it was in the same vein as ‘Before I Fall’ and was about a teenage girl trying to make amends for her mistakes so that she could earn another shot at life.

The main problem I had with this book was the same complaint I felt at the end of ‘Before I Fall’. I just didn’t like the main character of Bridget, which meant that I found it difficult to empathise with the situation she was experiencing. Although she had admittedly grown on me slightly by the conclusion of the story, it was hard to feel any genuine sympathy for her and sadly, I didn’t wholly believe in the reversal of her character.

The first half of the book focuses on establishing Bridget as a figure who often evokes fear in the other students at her school. She’s disruptive in class and rude to her teachers, she makes snarky and belittling comments to the people who are supposed to be her friends, she shows no respect at all towards her step-mother and never ever thinks about the consequences of her actions. Although the book attempts to explain how Bridget has become like this, I still didn’t find that this made it any easier for me to connect to her and I never really fell in love with her personality.

I enjoyed the second half of the book more which involved an interesting concept whereby she gets to literally walk in other people’s shoes and share their experiences and feelings. This certainly helps to open her eyes to the way her behaviour has affected those around her.  I particularly liked the storyline with her step-mother which I thought was handled well and actually did leave me feeling quite emotional.

Although the content and subject matter of this story didn’t win me over, I nevertheless thought that Paige Harbison’s writing was sharp and intelligent and I shall keep a look out for future titles from her.
Posted by Samantha (A Dream of Books) at 00:00