Goodreads synopsis:
Butterfly effect: The scientific theory that a single occurrence, no matter how small, can change the course of the universe forever. Jamie and Will, bunking off school to go hunting. Kuni, trapped in an icy crevasse. Shelton, on a deadly mission for revenge. Bakili, under attack from bloodthirsty baboons. Tina, piloting flight 492 to Moscow. For them, and many others, things will never be the same again. Some will live. Many will die. All are connected. A heart-stopping adventure that will leave readers breathless. 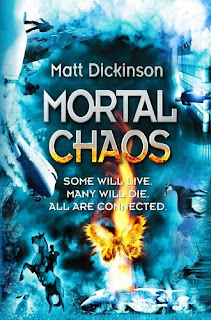 Review:
'Mortal Chaos' is described as 'the book Jack Bauer would have read as a teenager'.  As a huge 24 fan, that was more than enough to pique my interest in this title.  This is the first book for teens and young adults written by Matt Dickinson, who has already successfully authored a series of high octane adult adventure novels.

This title is the first in a new series which is inspired by Ray Bradbury's 1952 story 'A Sound of Thunder' (I need to go and read that now!).  I thought that the concept for the book was really interesting.  It's based on the idea that the beat of a butterfly's wings could cause a chain of events which cause reverberations as far reaching as the other side of the world.  Although this was a clever concept and I could see how the story was designed to work, it did fall a little bit flat for me at times in the way it was executed.

The book was made up of lots of stories which initially seemed completely unrelated but then gradually became more and more interconnected the further on I read until the point that you could clearly see how one small event could trigger a whole series of bigger catastrophes to happen.  The stories were extremely varied and included a young climber on Mount Everest, two boys out playing with a gun, a female pilot trying to get to work, a small boy trying to protect his family's crop, a family out enjoying their daughter's birthday and many more.  My main issue was that some elements of the stories were a lot more interesting than others and although the culmination of the book was high octane, it took a long time before anything gripping really seemed to happen.  This meant that some parts failed to keep my attention, although I enjoyed the moment when all the parts of the puzzle slotted into place and I could see how each person was going to be affected by events.  I personally would have liked to have seen more depth and description, as each scene seemed so short and brief that I didn't have sufficient time to develop a relationship with all the characters.

This is a book that would definitely appeal to both a male and female teen audience and if you're interested in the idea of the butterfly effect then this is an intriguing take on a fascinating concept.  Although I would have preferred a little more action throughout this was still an entertaining read and I'll be checking out the other books in the series as and when they're published.

Find out more about this book and many others by visiting the sites below:

WHSmith
Posted by Samantha (A Dream of Books) at 00:00