Legend by Marie Lu
Published on 28th November 2011 by Puffin 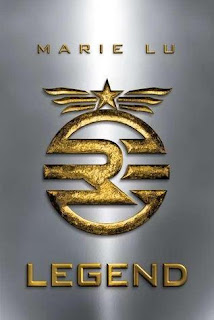 Born into the slums of Los Angeles, fifteen-year old Day is the country's most wanted criminal. A mysterious boy with no recorded image or fingerprints. A boy who should no longer exist. A boy who watches over his family until one evening, when the plague patrols mark his family's door with an X--the sign of plague infection. A death sentence for any family too poor to afford the antidote. Desperate, Day has no choice; he must steal it.

Born to an elite family in Los Angeles' wealthy Ruby sector, fifteen-year old June is the Republic's most promising prodigy. A superintelligent girl destined for great things in the country's highest military circles. Obedient, passionate, and committed to her country--until the day her brother Metias is murdered while on patrol during a break-in at the plague hospital.

Only one person could be responsible.

And now it's June's mission to hunt him down.

Dystopian fiction is one of my favourite genres and so I really like the sound of this new title from Puffin.  I've read some fantastic advance reviews of the book which sum it up as an addictive, pulse-pounding read, so it's definitely going on my wishlist!
Posted by Samantha (A Dream of Books) at 00:00