Goodreads synopsis:
In Faye McCarron’s sleepy New England town of Winter Mill, the snow has arrived a little ahead of season—September, to be exact. But Faye and her best friend Liz are too busy reporting for the school paper to give the sudden chill much thought, especially with two new boys, Lucas and Finn, heating things up. Mercy Morrow, a wealthy heiress, has baffled the community by moving into a remote old mansion in the woods, bringing her charismatic son Lucas with her. And while Finn may be a member of the Black Dogs, a motorcycle gang taking over the streets, Faye can’t help but be intruiged by his gruff, dangerous allure.

Soon, Faye and Liz realize that romance may be the least of their worries. A dead body has turned up in the woods, the Black Dogs are on the prowl, and the snow just won’t stop falling. As the temperature drops and Halloween approaches, the girls must discover the dark and menacing secret at the heart of Winter Mill—before it’s too late. 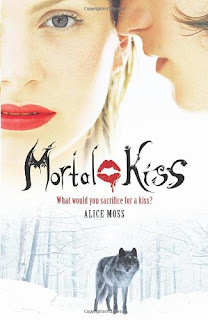 Review:
This is the first book in a new paranormal romance series by author Alice Moss.  I hadn't heard a lot about the title prior to reading it but the cover kept catching my eye in bookshops so eventually I caved and bought a copy.  I'm so glad I did because I thoroughly enjoyed it and am now looking forward to the sequel which is due to be published next year.  The book was originally published on Stardoll, an online gaming website and was so popular that it was soon after released in print.

It reminded me a little bit of the Dark Touch series by Amy Meredith which I'm a big fan of.  The story centres around best friends Faye and Liz who have lived in the small town of Winter Mill all their lives.  Things start to get complicated when two new boys appear on the scene, biker boy Finn and rich new boy Lucas whose mother has relocated them to live in the town.  The two girls end up having to try and stop a terrible evil while also dealing with their own romantic issues.  I was a little dubious at the start about the friendship between Faye and Liz who are supposed to have been best friends forever but then seem to doubt each other very quickly whenever something goes wrong.  There are a lot of ups and downs between them but when it really matters they do come through for each other.  I preferred the character of Faye to the slightly more shallow Liz, although she grew on me as the story progressed.

The freak weather at the beginning of the story, with heavy snow falling in Winter Mill during September, signals that something unusual and rather eerie is about to happen.  I felt a definite sense of unease as I was reading and couldn't help shivering, as if I too was experiencing the unsettling feeling shared by the characters.

The two boys, Finn and Lucas, will probably divide readers but I personally loved bad boy Finn, who feels a strong attraction to Faye and who's hiding a big secret.  He initially cultivates the image of a tough biker who will only end up leading Faye into trouble, but he really has a heart of gold and will do anything to try and protect her.

The story was really fast-paced and exciting.  I was never quite sure what direction the plot was going to take next which meant that I didn't want to put this down until I'd read just one more chapter...and then maybe just another.  There were a lot of cliffhangers too which kept me in a perpetual state of suspense.  The mystery at the heart of the book was unpredictable and rather different from anything else in this genre and I enjoyed both the build-up to the big reveal and the resolution.  There were plenty of shocks and surprises throughout and some interesting plot threads were planted for the sequel, 'Fool's Silver' which I can't wait to read.
Posted by Samantha (A Dream of Books) at 00:00