Goodreads synopsis:
Nobody expected Dru Anderson to survive this long. Not Graves. Not Christophe. Not even Dru. She’s battled killer zombies, jealous djamphirs, and bloodthirsty suckers straight out of her worst nightmares. But now that Dru has bloomed into a fullfledged svetocha—rare, beautiful, and toxic to all vampires—the worst is yet to come. Because getting out alive is going to cost more than she’s ever imagined. And in the end, is survival really worth the sacrifice?

Dru Anderson’s not afraid of the dark.
But she should be. 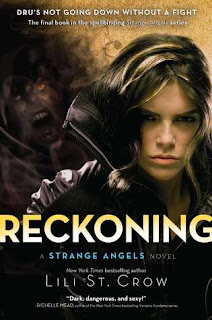 Review:
There may be spoilers from previous books in the series.

This is the final installment in the Strange Angels series by Lili St. Crow.  This has long been one of my favourite series, combining both vampires and werewolves, as well as an extremely feisty and kick-ass heroine in the form of Dru Anderson, so I really tried to savour every second of  reading 'Reckoning'.  I have to say that having got very attached to all the characters, I did hope that certain things were going to happen and I had my own personal views about the way in which I wanted the storyline to unfold.  In some respects the book did meet my expectations but without giving anything away, I was a little bit unsatisfied with the ending.

The book opens after Dru's successful rescue of Graves.  Now on the run from Sergej, most of the action takes place outside of the confines of the Schola Prima.  It was interesting to see Dru having to try and survive on her own for a while without all the protection she's been used to.  What I love about Dru is that she is a true survivor.  She's been through so much and yet she always seems to come out stronger on the other side.  She does find it incredibly difficult to let anyone help her though.  She believes she's ruined the lives of the people around her and what she sometimes fails to see is that they would do anything and be willing to sacrifice anything to keep her safe.  Part of Dru's journey has always been about learning to trust those closest to her and opening up enough to let people into her life and this is something that she's gradually managed to achieve throughout the series.

The majority of the plot is concerned with tying up the two plot strands that have been prominent from book one.  The first is Dru's desire to get revenge on Sergej for her mother and father's death and the second is the love triangle between Dru, Christophe and Graves.  Those hoping for a face off between Dru and Sergej will certainly not be disappointed.  There's plenty of action, particularly in the second half of the book and there's enough excitement crammed into the story to keep you well and truly glued to your seat!

As for the love triangle, there's usually a clear divide between readers who love either the loyal figure of Graves who is like Dru's best friend, or those who prefer the brooding and handsome Christophe, who often appears at exactly the right moment to rescue Dru from another dangerous situation.  Knowing that, I feel like there wasn't necessarily a proper resolution to Dru's romantic entanglements.  The end of the book was very much left up to the reader's own interpretation, although there are some definite hints made about what might happen next.  It's a brave choice for Lili St. Crow to have made but I would have liked things to have been a little more clear cut rather that inferred.

This has been a wonderful series and I really wish that the ride wasn't over!  The writing has been sharp, the plot has been gripping and the characters have led readers on an incredible journey full of ups and downs, action and excitement.  I will be eagerly waiting to see what Lili St. Crow writes next as she's definitely an author to watch!
Posted by Samantha (A Dream of Books) at 00:00