Goodreads synopsis:
The world according to Oliver Twisted is simple. Vampyres feed on the defenceless. Orphans are sacrificed to hungry gods. And if a woe-begotten catches your scent it will hunt you for ever. When a talking corpse reveals that Oliver will find his destiny in London, he sets out to seek the truth. Even if it means losing his soul. 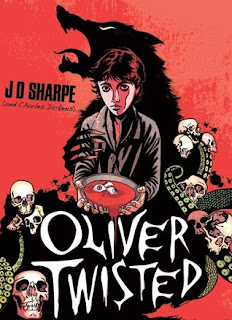 Review:
'Oliver Twisted' is one of the first offerings from Egmont's new young adult imprint Electric Monkey.  Published to tie-in with the bicentenary of Charles Dickens, 'Oliver Twisted' puts a fresh spin on the Dickens classic while remaining true to the spirit of the original.

I'm a huge admirer of Dicken's work so I was immediately intrigued about this title.  Much like the author JD Sharpe, I've always loved 'Oliver Twist' and enjoyed the story of an orphan boy whose life eventually takes a turn for the better after enduring hardship and adversity.  I was curious to see how the author was going to reintroduce this story to a whole new audience of readers while injecting it with a modern twist.  The introduction of vampyres, zombies and werewolves does the job quite nicely!

Familiar characters are not forgotten and are cleverly interwoven into the story, including faces such as the Artful Dodger, Nancy, Bill Sykes and the wicked Fagin.  It was fun to see Dodger turning himself into a wisp of smoke and Fagin having a magical hold over his boys.

A new backstory is invented for Oliver who is still an orphan but now also becomes a pawn who the infamous and evil Brotherhood want to use to defeat the Knights of Nostradamus.  I thought this was an interesting subversion of the original plot and meant that the story actually became far darker and creepier than the classic we all know and love.  Before starting this book I did worry that it might be a bit too gory for my tastes but in actuality I found that there were just the right amount of thrills and spills to make this a compulsive and exciting read.

'Oliver Twisted' is an inventive take on a much loved classic and one which will have widespread appeal for both a male and female readership.  I really enjoyed reading it and look forward to more books by JD Sharpe in the future.

To celebrate the release of 'Oliver Twisted' I'm giving away a paperback copy of the book.  The giveaway is international but you must be a follower of my blog to enter.  Just fill out your details on the form below.  Good luck!