Angel is on the run. Her mother is dead, her body buried in a shallow grave by her latest boyfriend, Scotty, a ruthless, illegal hunter who is prone to violence and who wants Angel dead before she can talk to the police.
Angel has lived through more than a young girl should have but she's determined to stay alive.
But in the scorching heat of the open desert, where can she hide? 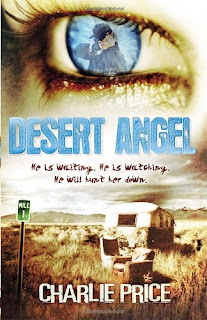 Review:
Dubbed as a 'cat and mouse thriller', I thought that 'Desert Angel' was going to be a gripping and exciting read.  Although some parts of the story were pretty tense, it didn't quite live up to my expectations.  Angel is on the run, being chased by Scotty, the man who murdered her mother and then tried to kill her too.  Only fourteen years old she's wise beyond her years but is now caught in a desperate struggle for survival with a dangerous killer.

There is a claustrophobic feel about the story and you get the sense that no matter where Angel goes, Scotty will hunt her down and find her.  However, whereas I thought that Angel was going to have to rely on her wits and survival instincts alone and that most of the story would take place in the middle of the desert, in reality, Angel soon meets a number of people who are willing to help her, including Rita who becomes like a proper mother to Angel.  This changed the dimensions of the story quite significantly and meant that the story was rather more sedate in places than it could have been.  In particular, I found that the passages which took place in the local school were rather at odds with the main plot and slowed down the overall flow of the story.

Scotty was a sinister figure throughout, particularly because some of his actions against Angel are never spoken aloud but the implication of what he's done to her are explicit never the less.  He also comes across as an insane and unhinged individual who is ruthless in his single-minded pursuit of her.

I found the ending of the book quite abrupt and after the inevitable showdown everything seemed to be wrapped up quite quickly, leaving some parts feeling slightly underdeveloped.  Although I had high hopes for 'Desert Angel' it just didn't deliver on its earlier promise.
Posted by Samantha (A Dream of Books) at 00:00