Girl Meets Boy edited by Kelly Milner Halls, published by Chronicle on 1st March 2012
Goodreads synopsis:
What do guys and girls really think? Twelve of the most dynamic and engaging YA authors writing today team up for this one-of-a-kind collection of "he said/she said" stories-he tells it from the guy's point of view, she tells it from the girl's. These are stories of love and heartbreak. There's the good-looking jock who falls for a dangerous girl, and the flipside, the toxic girl who never learned to be loved; the basketball star and the artistic (and shorter) boy she never knew she wanted; the gay boy looking for love online and the girl who could help make it happen. Each story in this unforgettable collection teaches us that relationships are complicated-because there are two sides to every story. 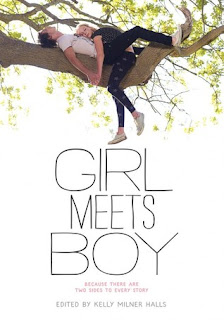 Review:
‘Girl Meets Boy’ has an eye-catching cover and is packaged as a perfect romantic read for Spring. It’s a collection of short stories by twelve of the hottest young adult authors around about love and romance. I’m not always a massive fan of the short story format but I was excited to read this particular collection. The editor’s introduction says that the stories are about bridging the gap of gender-based misunderstandings and I think that’s a pretty accurate assessment of this title.

What I really liked was the format which is based on the idea of he said / she said, presenting both the male and female view of a relationship. Often the characters in the stories interpret events completely differently which puts an interesting spin on the stories. The authors who were teamed together included James Howe and Ellen Wittlinger, Chris Cutcher and Kelly Milner Halls, Terry Davis and Rebecca Fjelland Davis, Rita Williams-Garcia and Terry Trueman, Joseph Bruchac and Cynthia Leitich Smith and Sara Ryan and Randy Powell. Some of these authors I’d heard of before and some were completely new to me but I’m now looking forward to reading their other books.

I enjoyed certain stories more than others but then I think that’s always the case with short story collections. My favourites were probably the first in the book ‘Love or Something Like It’ by Chris Cutcher and the reply ‘Some Things Never Change’ by Kelly Milner Halls. I also felt quite touched by ‘Want to Meet’ and ‘Meeting for Real’. These were almost too short for me, as I would have liked to have seen the stories and characters developed further. That’s why I usually prefer full-length books, because the author will always have more time to explore all the issues raised.

I actually would have liked to have seen more romance in a lot of the stories too. There was much less than I’d originally anticipated and many of the stories were about the characters delving into and dealing with their own personal issues rather than romantic love in the conventional sense. These issues ranged from a girl who’d had a sex change, to a gay boy seeking love online, to a relationship between a Muslim boy and a Christian girl.

Although my heart didn't flutter as much as I thought it would, I still really enjoyed this unique and interesting book which certainly looks very pretty on my shelves!
Posted by Samantha (A Dream of Books) at 00:00