I have a fabulous guest post today from James Dawson, the debut author of 'Hollow Pike' which is a gripping and thrilling read about witchcraft and supernatural goings on.  If you haven't grabbed yourself a copy yet then what are you waiting for! 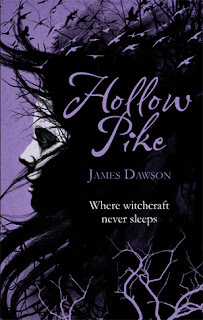 Who is the ‘Girl Next Door’?

Please allow me to introduce Lis London, the main character of new YA thriller Hollow Pike. In the spirit of ‘show-not-tell’, to really get to know Miss London, you’ll have to buy the book (available now at all good bookshops!). Moreover, I’d really struggle to provide a list of adjectives to describe her, and yet I feel I know her inside out. You guessed it – she’s THE GIRL NEXT DOOR.

Readers of young adult fiction are more than familiar with this character. Bella Swan, Luce Price, Grace Brisbane and Nora Grey have all gone before Lis, perfect examples of the ‘relatable’ female protagonists of various sagas.

The girls above have a lot in common. First aesthetics. ‘Pretty-but-not-too-pretty’ is a mainstay of YA fiction. Why? All of the girls-next-door are beautiful (in a unique, quirky way) but more than their actual looks, it’s their perceived beauty that counts. A girl who knew she was hot would be a big turn off to any reader, but especially a teenage girl. No-one wants a vain, arrogant best friend – and the MC of a YA novel should be a potential BFF to the reader. Therefore, these girls are doomed to a life of unruly hair, slightly too prominent noses and frustrating ‘boyish’ figures.

Some personality traits are more desirable than others too. While a YA heroine is allowed flaws, her moral compass must firmly point north at all times. If she does stray from the righteous path, it must be because of a) love or b) some greater good. For instance, stealing, lying, betrayal and cheating – while fairly common place in most secondary schools, are not going to fly in YA. That’s right, our girl-next-door is a role model for young readers, whether she likes it or not. As an author, I knew Lis had to be a ‘good girl’, and that’s fine. Lis is a good egg – she loves her friends, she’s never judgemental and has ambition. If Lis inspires other young adults (male or female) to be good eggs too, that is a positive thing.

The funny thing is, the girl next door to me in South West London is a Ugandan Muslim girl who goes the high school up the road. No, the archetype we’re thinking of is Hayden Panettiere or Selena Gomez – who, in reality, are millionaires living in Hollywood mansions. These ‘All American Girls’, sociologically speaking, are constructed more as a remedy to other (often less flattering) cultural stereotypes such as ‘tomboy’, ‘girly girl’ or ‘femme fatale’. They don’t necessarily have characteristics of their own – what sets them apart is their lack of ‘traditional’ feminine traits. In the Marvel Comics world, Mary-Jane Watson is literally presented as the girl next door to Peter Parker – beyond this simple fact she is hard to describe. I personally think the archetype was set by Judy Garland as one Dorothy Gale in the Wizard of Oz – the wide eyed wonderment and moral purity filtering down to Buffy, Bella and beyond.

With this in mind, perhaps the Girl-Next-Door isn’t such a bad thing. Perhaps better to strive for an ‘average, approachable girl’ than a one-note ‘tomboy’. But I know what you’re shouting – there’s no such thing as an ‘average girl’, everyone’s different. All I could do, as an author, was think how I and my friends would react in the situations Lis finds herself in. While writing Hollow Pike, I based Lis on two very dear friends. This, to me, seemed like the best way of making Lis ‘real’. I wonder if all writers do this.

Anyway, I’d love to know what readers think of Lis London. She’s already my BFF, so I hope you take her to your hearts too. Look after her, she’s a good egg.
Posted by Samantha (A Dream of Books) at 00:00