Goodreads synopsis:
August (Auggie) Pullman was born with a facial deformity that prevented him from going to a mainstream school—until now. He's about to start 5th grade at Beecher Prep, and if you've ever been the new kid then you know how hard that can be. The thing is Auggie's just an ordinary kid, with an extraordinary face. But can he convince his new classmates that he's just like them, despite appearances? 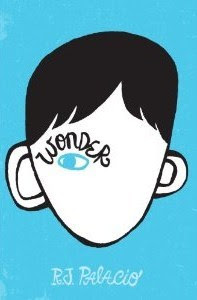 Review:
'Wonder' is truly inspirational.  It's an amazing and emotional read that made me cry so much but that also inspired me to be a better person and a kinder person and to never forget that you shouldn't judge someone by their appearance alone.

This is the type of book that you'll be dying to press into someone elses hands to read as soon as you've finished it.  Instead of tucking it onto your shelves, share it with everyone you know.  It's incredible.  When I reached the last page I had tears in my eyes but I was also smiling after joining Auggie on his wonderful journey to best friends and happiness.

There is a lot of buzz surrounding 'Wonder' but it's not until you actually read it yourself that you understand what it's all about.  When I received this book I wasn't sure initially if it was going to be for me.  It's certainly not the sort of book that I'd normally choose for myself.  However, like the characters I learned not to be so hasty in my judgements as I soon became immersed in the story and rooting for the inspirational August - a little boy who has to endure so much but is still able to enjoy life and teach other people a thing or two about being a better person.

This is the kind of book that doesn't come along every day.  It's very special and it's one that will stay with you long after finishing it.  You need to read this for yourself.  It's a wonder of a book!
Posted by Samantha (A Dream of Books) at 07:05