I have a wonderful guest post today by J.D Sharpe, the author of the fabulous 'Oliver Twisted'.  This was a fantastic read combining all the things I loved about Dicken's original novel with a fresh and unique new twist. 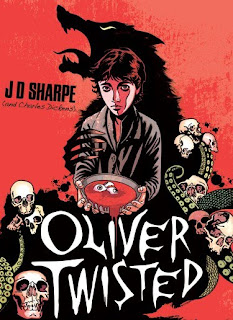 Me, Dickens and London

London was Dickens’s greatest inspiration. He knew its backstreets and alleys better than anyone. The slums that populated the city may have long-since been torn down for tube stations, but his vivid descriptions remain with us, a living, breathing history. Dickens often walked the streets, for hours on end, plotting his novels and observing the lives of men, women and children around him. With his words he conjures up for us the sights, smells and sounds of a bygone London.

As a born and bred Londoner, the city has a lot to do with how I define myself as a person. I love its busyness, its craziness. I love its glitter and grittiness. Living in London is like living in Technicolor, you have to be switched on and aware in a way that just isn’t quite the same anywhere else.

I no longer live in London but if you opened up my veins I think I would bleed a Central Line red with a bit of Piccadilly Line blue.

To write Oliver Twisted, I did quite a lot of research on Dickens. He had his frustrations with the city - he hated the poverty he saw and the bureaucracy of government that had its seat in London but when all is said and done he loved the city as much as I do.

So, as we are both such fans of big smoke, here are some of my favourite London haunts/memories and some of Dickens’s as well.

Favourite Theatre
CD  For Dickens his favourite theatre may well have been the Lyceum Theatre. A stage adaptation of A Tale of Two Cities was performed here with Dickens overseeing rehearsals. It is said he might have even directed the play!

JD  One of my favourite theatre experiences has got to be Accomplice. It is part show, part tour, part mystery and all of awesome. You can buy tickets at the Menier Chocolate Factory but London is really your stage for this event!

Favourite Restaurant
CD Rules is one of the oldest restaurants In London, it began its life in 1798. Dickens used to eat here often as have many other actors and literary greats including HG Wells and Charlie Chaplin.

London Childhood Home
CD Dickens spent a chunk his childhood in Camden, at 16 Bayham Street to be precise although this building has now been torn down. He lived here while working near Covent Garden more of that later.

JD Hornsey. Home of Alexandra Palace Ice Rink, thespian Crouch End with lovely cafes, and the awesome Stroud Green and Harringey Library where I spent many an hour immersed in books when I was younger.

Toughest London Job
JD Working in a McDonalds, near the old Arsenal football stadium, when I was 16. Let’s just say that football fans + hungry does not = a pretty picture.

CD. Working just off the Strand, sticking labels onto pots of paste blacking used for boot polish when he was just 12 years old.

Dickens would walk anything from 10 to 20 miles a day. He did this for exercise, recreation and thinking time. These series of apps capture his walks brilliantly.

JD Tube. I love writing on the tube, something about the movement helps me to think. Also it’s a great place to people watch [not in a creepy way] and is a marvellous vehicle of discoveries.

So, the next time you’re at a loose end, get a travel card and get off at a stop you’ve never been to before. I love doing this. I remember the first time I headed south of the river and went to Elephant and Castle because it sounded so cool.

I don’t know what I was expecting but it wasn’t that rather forlorn pink elephant on top of the shopping mall . . .
Posted by Samantha (A Dream of Books) at 02:27