Goodreads synopsis:
Pia is living the dream: fresh out of college and sharing a house in Brooklyn with her best friends. So why is everything so complicated?

A drunken indiscretion has led to the loss of her boring office job, while her love life is a dizzy mess of accidental hook-ups and heartbreak...

Her parents don't trust her and, if she doesn't sort her life out soon, they're going to make her move back in with them...

But all that's nothing compared to the kind of trouble she's about to face. 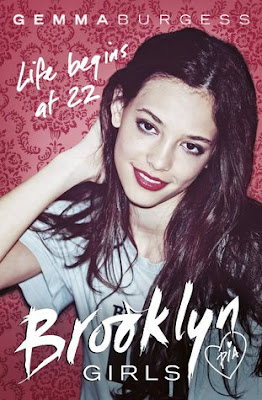 Review:
This is the first book in a new series by Gemma Burgess about a group of girlfriends in their twenties living together in New York and trying to adjust to adulthood.  Each of them are trying to carve out their own path while also figuring out who they are and what they really want out of life.  There's unemployed Pia who is attempting to stretch her wings away from her parents and get over a broken heart, as well as bookworm Coco (who was my favourite), crazy Angie, uptight Madeleine and in-control and ambitious Julia.

The opening story in the series is told from the point of view of Pia who can't seem to hold down a job and keeps getting herself into trouble by partying too hard.  It took me a little while to actually warm to her as she makes quite a lot of questionable decisions but I liked the way that she always looks out for her friends and she is always there for them, as they are there for her in times of need.  I admired the way she tries to turn her life around and her determination not to give into her parents, even when that may have been the easiest route to take.

There actually isn't a huge amount of romance throughout the book as it focuses mainly on the relationship and friendships between all of the girls.  That's good though because it makes such a refreshing change.  Each of the girls is so different and they have really unique personalities that it was fun getting to know them all along the way.

This is a New Adult book but to me, it seems to fit in nicely to the niche which exists between NA and YA.  It's definitely not for much younger readers though as there's a lot of adult themes and content.

Fresh and hip, this series is like Sex and the City but with younger characters.  The next book in the series is set to be about Angie and will be published in 2014.  I'm looking forward to finding out what they'll all get up to next.
Posted by Samantha (A Dream of Books) at 00:00