Goodreads synopsis:
The first time Lou meets tall, dark, and handsome Christian, she knows he's hiding something. Why does he clam up every time she asks about his past? Why doesn't he have any family photos and why does he dye his blond hair black?

Then suddenly his terrible secret is unveiled to the world - and it seems everything he's ever told Lou is a lie. Can what the media are saying about him really be true? Should Lou trust him? Or is she in terrible danger? But Christian isn't the only one keeping secrets. For what if their chance meeting was no accident at all ...?

As lie follows lie, nothing is as it seems, and soon Lou finds herself ensnared in a web of deceit, her loyalties torn, her emotions in tatters as she faces a heart-wrenching dilemma: should she shatter the lives of those she holds dearest, or betray the guy who, against all odds, she's fallen in love with? 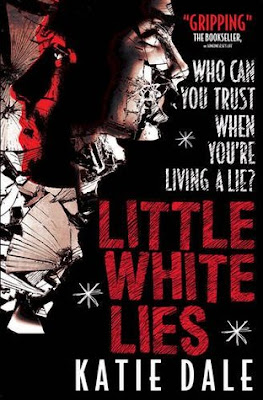 Review:
UK author Katie Dale's second novel is equally as strong and compelling as her first.  It throws up difficult questions about love and loyalty which got me to question what I would do in the same situation.

Lou is starting a new life at university when she meets Christian.  He seems very secretive and doesn't like to talk about himself.  She seems determined to get to the bottom of who he really is but when the truth is unravelled whose side will she be on?  The story follows the two of them as their lives literally collide with explosive and shocking results.

The first half of the book introduces the main characters - Lou and the gorgeous but mysterious Christian.  The second half takes everything you thought you knew about them and turns it on it's head, with some shocking revelations and lots of surprising twists and turns.  Things are no longer black and white and the characters have some interesting choices to make about their futures.

I guessed one of the plot twists from some of the clues which were provided quite early on but another was a major surprise.  I enjoyed that element of the book - that not everything is just laid out for the reader and you're made to work to get to the bottom of things.  I always felt like the ground was shifting beneath my feet as, along with Lou, I attempted to solve the puzzle.

'Little White Lies' had an intriguing and gripping plot with an emotional intensity which really hits you head on.  I'm looking forward to seeing what subject Katie Dale will turn her hand to next as she seems a very versatile author who isn't afraid of confronting difficult topics.
Posted by Samantha (A Dream of Books) at 00:00