The Kissing Booth by Beth Reekles, published by Corgi on 22nd April 2013

When Elle decides to run a kissing booth at the school's Spring Carnival, she locks lips with Noah and her life is turned upside down. Her head says to keep away, but her heart wants to draw closer - this romance seems far from fairy tale and headed for heartbreak. But will Elle get her happily ever after? 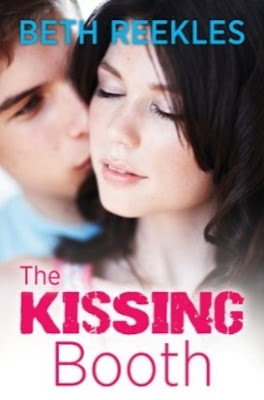 Review:
'The Kissing Booth' is the debut novel of eighteen year old Beth Reekles, who became an internet sensation on Wattpad and then landed her first publishing deal.  This is incredibly impressive for someone so young and made me even more intrigued to see what her writing would be like.

The story itself centres around Rochelle, or Elle as she likes to be called.  She's never been kissed and never had a boyfriend but all that is about to change when she and her best friend Lee decide to hold a kissing booth.  Elle has two central relationships in the book.  The first is with Lee who she has known since they were born and who is like her other half.  I really liked their friendship which is purely platonic and it was refreshing not to have this complicated by romantic feelings on either of their parts.  Elle and Lee can often read each others minds and do nearly everything together.  The other relationship is with Lee's older brother Noah Flynn who she has had always had a huge crush on.

I liked Noah and there was a lot to make me feel weak in the knees about him but I did think that his behaviour was slightly questionable at times.  He's a hothead and often can't control his temper and I thought that he came across as far too aggressive and controlling when it comes to Elle.  He's protective of her which I didn't mind but he has a tendency to take things too far and I couldn't help feeling that he should have been more trusting where she is concerned.  Elle's relationship with Noah moves pretty fast and I felt it was quite rushed at times.  As this is a fairly long book, I thought it could have been developed more rather than everything happening at once.

I also have to agree with the other comments I've read about the setting of this book.  As the author is British I feel like she should have perhaps set her story in the UK or if she was determined to go for a US setting then she needed to have nailed some of their phrases and culture more accurately.

All that aside, this was still a really enjoyable story which I feel fits into the young-adult genre more than the new-adult niche.  I was impressed with Beth Reekles writing and it will be interesting to see how she develops as an author in the future.