Goodreads synopsis:
Someone is stalking Alice Forster. She's sure it's her sister's murderer, but her parents think she's cracking under the stress of Meggie's death. Only in the virtual world of Soul Beach - an online paradise for the young, the beautiful and the dead - can Alice feel truly free. But there's trouble in paradise . . .

A storm is brewing.

The killer is about to strike. 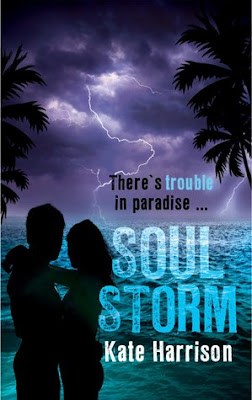 Review:
'Soul Storm' is the final part of the trilogy about Ali's determination to find her sister Meggie's killer.  I felt like I'd been waiting for this book for such a long time and because of that I had to resist the temptation to take a sneak peek at the ending to find out who the killer was.  This only made me read faster as I was so impatient to get to the final big reveal.

It's testament to Kate Harrison's writing that I continually changed my mind about who I thought could have been responsible for all the deaths that happened throughout the series and especially that of Meggie.  I'd pretty much convinced myself that one particular person was responsible for everything only to have myself proved totally wrong.  At one point or another I was pretty much suspicious of everyone but that only made reading the book so much more thrilling.  I adored the element of suspense surrounding the killer's true identity and I think Kate Harrison managed to squeeze every single drop of tension out of the storyline.

There is a sense of danger lurking around every corner as Ali thinks she's being followed and watched by someone.  I didn't like her being alone with anyone in case they turned out to be more dangerous than she could have ever imagined.  Although she does seem quite reckless at times, I can understand her determination to get to the bottom of things once and for all.  Only then can she put her sister's death to rest and move on with her own life.

There wasn't quite so much of the Beach and it's residents in this instalment and I have to say that I wasn't completely satisfied with the conclusion of the Ali/Danny storyline but overall it has been intriguing having the cyber world as another plot strand.

Kate Harrison has very adeptly made the transition to the Young adult genre.  I hope she has plenty more YA stories planned for the future because I definitely want to read more.