Casting Shadows by Sophie McKenzie, published by Simon and Schuster on 4th July 2013

Goodreads synopsis:
Flynn is making every effort to stay in control of his hot temper, while River feels more content than she's ever been. Together the two of them make big plans for the future, but powerful secrets lurk in the shadows, ready to threaten their happiness. 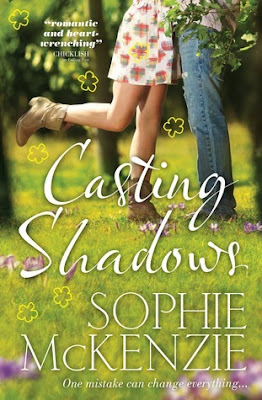 Review:
This was another enjoyable instalment in the series about River and Flynn.  The two teenagers are now living together with River's Dad at the commune.  Things seem to be much better with Flynn's temper until secrets are revealed which may upset all their future plans.

It seemed inevitable that something was going to happen to get in the way of their happiness.  They've had so many ups and downs and have always managed to sort things out but this time it may be the end of the line for them.  I think teens will love this book because the romance between River and Flynn is intense but not completely romanticised.  There are real problems and obstacles for them to overcome and they are still trying to get River's family to completely accept them being together.

I still like Flynn but my feelings about him have changed as the series has progressed.  I do think he overreacts quite a lot and even when he has a grip on his temper he can still fly off the handle over non-consequential things.  It always seems to be River who has to suffer and I'm almost at the point now where I think she could be happier without him.

The next book (and the last one) in the series is called 'Defy the Stars'.  It will be intriguing to see if a happy ending is on the cards or not for the teen lovers.
Posted by Samantha (A Dream of Books) at 00:00