Forever Too Far by Abbi Glines, published by Simon and Schuster on 1st August 2013

Goodreads synopsis:
Rush promised her forever... but promises can be broken.

Torn between his love for his family and his love for Blaire, Rush has to find a way to save one without losing the other. In the end one has to be more important. Letting go isn’t easy.

Blaire believed in her fairytale... but no one can live in a fantasy.

Her love for Rush and desire to have a family keep her believing that they can find a way for this to work. Until she has to make the right decision for her and the baby. Even if it breaks her heart.

Can they find the forever that they both want or has it all just gone... too far? 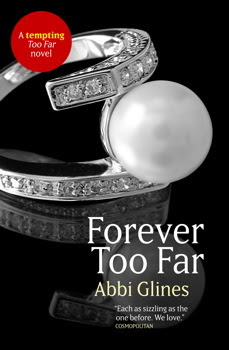 Review:
'Forever Too Far' was in my opinion the perfect end to Rush and Blaire's story.  I couldn't have asked for more.  Abbi Glines delivered some of the most achingly romantic scenes I've ever read and if you were still in any doubt about whether or not these two should be together, then you won't be by the end of the book.

Rush has changed so much since the series began.  At the start he was really only interested in himself.  He was shallow, arrogant, rich and dare I say it, obnoxious.  Meeting and falling in love with Blaire has turned him into a man who is prepared to do whatever it takes to look after his family, a man who knows where his priorities lie and who will stop at nothing to give the people he loves everything they ever dreamt of.

I really liked the fact that we got to see Rush's father Dean and the lifestyle that he leads.  It definitely gave me more of an insight into how Rush was brought up and the sort of environment he would have been around.  I understood more about how this would have fed into his character and personality and it gave me additional admiration for how he has turned himself around and become a proper family man.

I don't want to give anything away about the plot but there was one scene near the end where he does something so utterly wonderful for Blaire that it made me go weak at the knees.  Abbi Glines is definitely the Queen of Romance because she writes moments so beautiful and touching that you wish it was happening to you.

There were some great new characters introduced in the book which I'm eager to find out more about.  I believe Abbi is writing future titles centred around some of these couples which is exciting to hear.  Rush and Blaire's story may be over but I cannot wait to discover who will be following next in their footsteps.
Posted by Samantha (A Dream of Books) at 00:00