Never Too Far by Abbi Glines, published by Simon and Schuster on 1st August 2013

Goodreads synopsis:
He had held a secret that destroyed her world.

Everything she had known was no longer true.

Blaire couldn’t stop loving him but she knew she could never forgive him.  Now, she was back home and learning to live again. Moving on with life… until something happened to send her world spinning once again.  What do you do when the one person you can never trust again is the one that you need to trust so desperately? 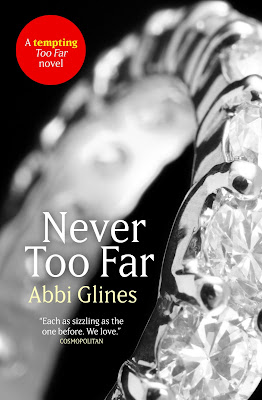 Review:
'Fallen Too Far' was one of the best books I've read this year so when I finally got my hands on the sequel 'Never Too Far' I didn't hesitate to put my current read aside and pick up this one instead.  I find myself saying the same things about Abbi Glines's books again and again but her stories just blow me away and I can't get enough of her writing.  This is yet another five star read which is packed full of drama, angst and heartbreak.

I love the fact that the book has a dual narrative so we get to finally hear things from Rush's perspective.  He is absolutely head over heels in love with Blaire but after making a big mistake he has to try and make things up to her and convince her that he won't always put his family before her.  I wasn't completely sold on the character of Rush the first time around but he won me over with his obvious determination to step up and make things right, as well as the way in which when Blaire's around (and even when she isn't) she's the only person he can think about.  She drives him crazy, in a good way and she seems to have the ability to always bring the best out in him.

I also adored the way in which he is super protective about Blaire and wants to look after her and keep her safe.  He gets possessive and jealous when she is around other men but I think that's sweet and is one of his qualities which is very attractive.  I don't want to give anything away but he also finally makes clear his intentions towards her and one particular chapter in the book just made me melt into a puddle.

As well as the main couple, Woods has suddenly become one of my favourite characters in the series.  I hope we get to see even more of him in the future.  I also thought that Bethy and Jace's relationship was really sweet and I would quite like to see a story just about them as well.

Hot, sexy and romantic with scenes to get you extremely hot under the collar, Abbi Glines has done it yet again with this amazing story about a couple who are destined to be together.  I hope they get the happy ending they deserve in the final instalment 'Forever Too Far'.