Goodreads synopsis:
A year after Janey’s suicide, her friends reunite at a remote Spanish villa, desperate to put the past behind them. However, an unwelcome guest arrives claiming to have evidence that Jane was murdered. When she is found floating in the pool, it becomes clear one of them is a killer. Only one thing is for certain, surviving this holiday is going to be murder… 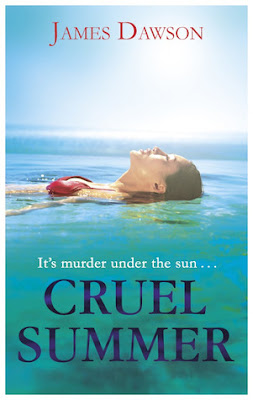 Review:
Fiendishly clever plot twists made this book impossible to put down.  I spent most of my time reading it literally on the edge of my seat, palms sweating and nails being bitten down to the quick!  If you haven't discovered author James Dawson yet then I recommend you go out and get yourself a copy of this title immediately.

The story is about five school friends on holiday together in a Spanish villa.  There's Ryan and Katie, Katie's ex-boyfriend Ben, Greg and his sister Alisha and Greg's new girlfriend Erin.  They should be enjoying sun, sea and sand but then someone turns up who claims to have evidence that their friend Janey was murdered and everything starts to spiral horribly out of control.

This book felt like a cross-between the film Scream and the TV show Harper's Island which I loved.  Everyone seemed to have a secret to hide and a motive for wanting to commit murder.  One of the characters, Ryan, who narrates part of the story, imagines him and his friends being part of a TV show so there are lots of bits which are clichés of horror films.  I thought that was a nice way of paying homage to what has obviously served as inspiration for the story, while at the same time providing plenty of original plot twists.

The second-half of the book was particularly tense, gripping and exciting with lots of red herrings and devilish twists and turns to throw the reader off the scent.  Although I did eventually guess who the killer was, I didn't have a clue about their motive or the extent they were willing to go to in pursuit of their ultimate goal.

I was a big fan of James Dawson's debut novel 'Hollow Pike' but he's outdone himself with his second novel.  This is the perfect read for a hot and sultry summer where murder is most definitely on the menu.