Today I'm co-hosting a stop on the blog tour for 'Just Like Fate' by Cat Patrick and Suzanne Young which was published by Electric Monkey on 6th March.  You can also check out this post on Book Angel Booktopia 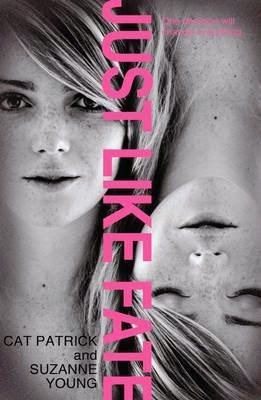 1.) Was Electric Freakshow based on a real band?

S-Early on, Cat and I knew we wanted to make Electric Freakshow as real as possible. Some of my students even made fake album covers and band T-shirts! Even though I knew which other bands they sounded like, I never pictured them as anyone else. Totally original.

C- We did manage to talk a real, Seattle-based band called The Social Fantastic into writing the music and producing/recording a version of the song for use in our US book trailer. It’s available for purchase on iTunes, as well.

2.) Who wrote the lyrics of Magnets for Fate?

S-I'm terrible at lyrics. I wrote a quick, awful draft of the song and Cat turned it into the masterpiece you see in the book.

C- Suzanne Young is a liar. She’s great at lyrics! Yes, it was definitely a collaboration, and we’re incredibly happy with how they turned out.

3.) What’s the most memorable live music experience you’ve ever had?

C- That’s a toss-up between seeing Arcade Fire at the outdoor Greek Theater in Berkeley, California on a warm summer evening, and seeing an intimate, acoustic Band of Horses performance at one of the loveliest theaters in Seattle, Washington on a cold, rainy night.

S-Oh, hm... When I lived in Portland, Oregon I went to an amazing jazz festival by the water. Live music, street food, handmade crafts? What could be better?

4.) Do you have particular songs that you’re listening to if you’re feeling happy or sad?

S-I listen to a lot of older songs. One of my favorites to listen to if I want to feel better is Jimmy Eat World's "The Middle". It reminds me that life can get better. The rest of my playlist is a lot of really dark and depressing stuff. I find it inspiring to write with them in the background.

C- I get it: That’s very you. There’s a song by Metric called “Sick Muse” that I like to blast in my car on a warm day. At the moment, though, I can’t stop listening to The National’s High Violet record. Those songs are like a mood ring: They reflect and amplify however you’re already feeling.

The lovely people at Egmont are also giving you a chance to win a copy of 'Just Like Fate' today on Twitter.  To be in with a chance, check out @EgmontUK today.
﻿
Posted by Samantha (A Dream of Books) at 00:00