A regular poster girl for Generation Screwed, being 22 isn’t what she expected.

What happens when having fun isn’t, you know, fun?

In the Brooklyn townhouse she shares with her best friends, Angie wants to figure out what to do with her life. But wild parties, bad dates, dead-end jobs, demanding fashionistas and even true love just keep getting in the way…

Who knew adulthood would be so damn grown-up? 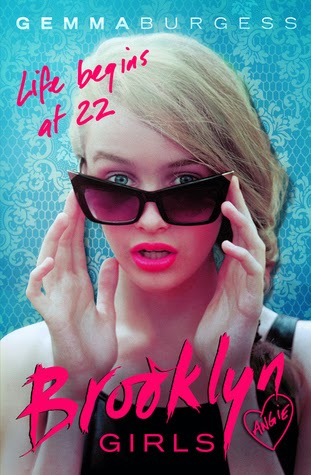 Review:
This is the second book in the series about friends living in Brooklyn, New York,  trying to have fun and find romance, while at the same time attempting to find their own individual future paths.  This story centres around Pia's best friend Angie, who is about to turn 23 and realises that her life is a mess.  She's single and unemployed, her parents are getting a divorce and she can't seem to leave her wild child days behind her, even though for the most part she's unhappy and spiralling out of control.

I really liked Pia in the last book and I knew that I was always going to struggle with Angie because her personality is so different.  She gets herself into some extremely bad situations and although she does try hard to turn her life around, I thought that she was very lucky to have some things just fall into her lap at the right time.  Underneath her tough outer exterior, which is all swearing and sex, she does want to have a purpose in life and she does want to make a success of herself, but it takes her a long time to get to that point.

A positive influence in her life is Sam, the mysterious boat boy who she just seems to click with.  The romance between them is a bit of a slow burner which I liked but I couldn't help but wonder why she took such a long time to open her eyes and wake up to her true feelings for him.  The thing I love about this series is that although there's romance, this takes a backseat to the friendship between all the girls at Rookhaven.  As much as I liked seeing Angie and Sam together, I also enjoyed seeing a new friendship blossom between Angie and Julia, who realise that they actually get on really well.

The setting for this series is brilliant and I like following the girls as they try to carve out careers for themselves, against the backdrop of New York.  A quick and fun read, although Angie wasn't my favourite of characters, I am looking forward to the next instalment in the series which focuses on Coco, who I've always liked.