Maybe Someday by Colleen Hoover, published by Simon and Schuster on 18th March 2014

Goodreads synopsis:
Sydney is living in an idyllic bubble - she's a dedicated student with a steady job on the side. She lives with her best friend, has a great boyfriend, and the music coming from the balcony opposite hers is fast becoming the soundtrack to her life. But when Sydney finds out her boyfriend is cheating on her, the bubble bursts. The mysterious and attractive man behind the music, Ridge, gives Sydney hope that she can move on and they begin to write songs together. But moving on is harder than she expects, Sydney can only hope…. Maybe someday… 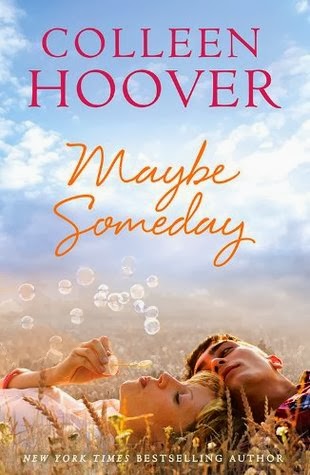 Review:
It's hard to believe but 'Maybe Someday' is my very first Colleen Hoover book.  I don't know how I've managed to go so long without picking up one of her novels but now that I have, I will definitely be tracking the rest of them down immediately.  I'd heard such great things about her stories and now that I've experienced one first-hand, I just know that I'm going to love them all.

I have to start this review off by commenting on the fact that this book has the most beautiful cover art.  The colours are gorgeous and very spring-like and if I hadn't been offered this one for review, then there's no doubt that this would have caught my eye in my local bookshop.  It's so, so pretty!

The story itself centres on Sydney, who has just found out that her boyfriend of two years has cheated on her.  With her life spiralling out of control, she ends up living with her neighbour Ridge, a gorgeous musician that she's previously only seen from her balcony when she's listened to him play his guitar.  Sydney and Ridge begin to write songs together and soon find that they are attune to each other in so many different ways.  It doesn't take long before they have grown extremely close but the only problem is that Ridge already has a girlfriend.

At the start I wasn't sure if I was going to like the cheating aspect of the story but Colleen Hoover handles it perfectly so if you feel the same don't let this put you off.  I really liked Ridge's girlfriend Maggie and I actually liked her before she'd even physically appeared in the book.  When I finally saw her and Ridge together in the flesh then I was convinced that they made the perfect couple, until their relationship is examined in more detail.  Sydney grew on me throughout the book and I admired the way in which she always tried to do the right thing, even if her attraction to Ridge only kept on growing stronger and stronger.

The book very uniquely blends the story and the music together.  If you scan the QR code in the front of the book then you can actually listen to the songs sung by musician Griffin Peterson.  This adds another layer to the plot and creates a real emotional connection between the reader and the characters.

'Maybe Someday' is a really moving, emotional and heart wrenching book which throws up lots of questions about love and life.  I thought it was an utterly gorgeous read and I'm now looking forward immensely to working my way through the rest of Colleen Hoover's back catalogue.
Posted by Samantha (A Dream of Books) at 00:00