Goodreads synopsis:
Zara is a mage, one of the elite in a world where magic is power, and the non-magic majority live as slaves. When her slave child best friend is killed for the crime of literacy, Zara seeks revenge by spying for the rebel Knowledge Seekers. She finds her bravery and magical skill tested to the limit when a young Maker, Aidan, is taken hostage in a bid for supposed peace. Surprised by first love, she promises to help him. But before Zara can keep her promise, her secret is discovered. Hunted by her own, she seeks refuge with the Knowledge Seekers. But when you can kill with a thought, can you ever be trusted? 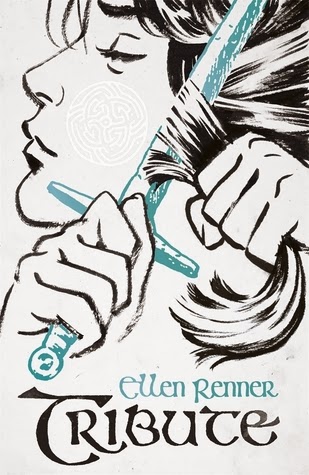 Review:
Tribute’ was a really unusual read but rest assured, it was unusual in a good way.  Steeped in fantasy, Ellen Renner has created a fascinating fantasy world unlike anything else I’ve come across before.  It took me a little while to become accustomed to some of the words and phrases used in the book but there’s a useful glossary in the back pages which definitely helped.  About a third of the way through it all started to click and come together for me and that’s when the story really started to take off.

The central character, Zara, is a Mage.  She is part of a society of people who have magic and can control the elements through telekinesis.  They also have the ability to will their mind into the bodies of animals and birds which they can then seize control of.  Zara’s father is one of the most powerful Mage’s alive but she has never forgiven him for taking away one of the few people she’s ever loved.  In spying for the Knowledge Seekers she hopes to right the wrongs done against the non-magical society, who have been enslaved and are at the will of the Mage population.
I instantly liked Zara as soon as she was introduced.  She thinks differently about things to everyone else and she’s willing to stand up and fight for what she believes in.  She really grew in character throughout the book and I admired her for many of the tough decisions she has to make.
I found all the different factions in the book absolutely fascinating.  As well as those who have magic, there are the rebel Knowledge Seekers and the Makers who live on the other side of the Wall.  They are fighting a continual war against the Mages and are determined to protect their community whatever the cost.
Ellen Renner’s writing made the characters and their world really come alive.  I was immersed in the story and on tenterhooks for most of the last part of the book.  ‘Tribute’ is a brilliant start to the series which is set to continue in August 2014 with ‘Outcaste’.
Posted by Samantha (A Dream of Books) at 00:00