The Madness by Alison Rattle, published by Hot Key Books on 6th March 2014

Goodreads synopsis:
Sixteen-year-old Marnie lives in the idyllic coastal village of Clevedon. Despite being crippled by a childhood exposure to polio, she seems set to follow in her mother's footsteps, and become a 'dipper', escorting fragile female bathers into the sea. Her life is simple and safe. But then she meets Noah. Charming, handsome, son-of-the-local-Lord, Noah. She quickly develops a passion for him - a passion which consumes her.

As Marnie's infatuation turns to fixation she starts to lose her grip on reality, and a harrowing and dangerous obsession develops that seems certain to end in tragedy. 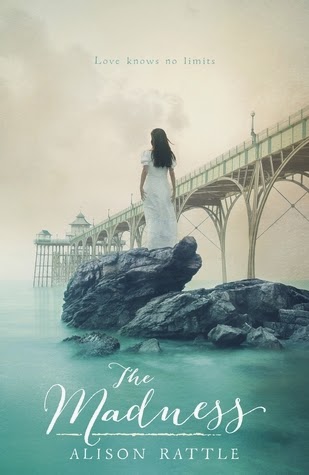 Review:
This is the first book I've read by Alison Rattle and I found it a superb example of historical fiction which brilliantly conjures up a sense of the place and time of the story.  It's set in the year 1868 in the seaside town of Clevedon.  I love reading about the Victorian era and it was a nice change of pace from a lot of the more contemporary books I've read lately.

The main character Marnie has been crippled by polio and walks with the aid of a stick.  She has been taught by her Ma to love the sea and she feels most at home and in her own skin when she's slipping between the waves, free and alone.  Her Ma is a dipper which was fascinating to read about.  Well to do ladies come to be dipped into the sea to improve their health at the recommendations of their doctors and it's Marnie's mother who runs a fairly successful business doing exactly this.

Marnie's story is interspersed with journal entries from Noah de Clevedon, who is temporarily staying in Clevedon, so that his mother can be near the sea and improve her health.  Marnie soon becomes infatuated with Noah but his journal reveals that he sees Marnie as nothing more than a way to have some fun and pass the time.  She is an amusement to him but her feelings for Noah run far deeper.

I felt sorry for Marnie but I have to admit that I never really liked her.  She's involved in a tragic event at the start of the book and almost from this point onwards I found that I couldn't give her my complete sympathy.  She begins to spiral out of control when her fixation with Noah takes over her life.  I thought Alison Rattle did a brilliant job of depicting the gradual deterioration of Marnie's senses but I still wasn't sure about the extent to which she was willing to go in her pursuit of Noah.

'The Madness' was an interesting read with lots of lovely details of the period.  This will appear to readers who like psychological dramas, as well as historical fiction.