Incinerator by Niall Leonard, published by Corgi on 30th January 2014

Goodreads synopsis:
London ganglord The Guvnor is in hiding, and Finn Maguire has begun a new life running a boxing gym with his old friend and coach Delroy. But when Finn's lawyer Nicky Hale vanishes overnight with all his money, Finn finds himself in hock to a loan shark with a vicious gang of enforcers. Desperate to track down Nicky and repay his debts, Finn investigates her other clients and soon finds himself engulfed in a web of lies, betrayal, malice and madness, with only his wits and his fists to keep him alive. 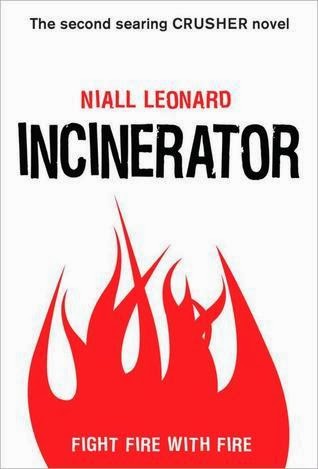 Review:
This is the second book in Niall Leonard's YA series about Finn Maguire.  He now co-owns a gym with his friend Delroy and is trying to get his life in order with the help of the money left to him after the deaths of his parents.  Following a nasty encounter with a loan shark, Finn agrees to pay off a debt but finds himself in further trouble when his lawyer Nicky appears to have absconded with the contents of his bank account.  He sets out to investigate her disappearance but things aren't what they seem on the surface and he looks like getting in over his head.

Everyone in the story seems to have a secret or something they want to keep hidden but Finn is determined to leave no stone unturned in his hunt for the truth about Nicky and in his quest to keep Delroy and his wife safe.  Finn is a great central character.  He's had a lot of problems in the past and has been mixed up with some really dangerous people but although he may have made some wrong choices he's very street savvy and isn't someone to back down from a fight.  He won't be pushed around by anyone but has tried really hard to get his life together even with things always seemingly conspiring against him.

There are some surprising twists in the story which I never saw coming and I had no idea what was going to happen until events unfolded.  The ending was also brilliant and left things on a tense cliffhanger which sets things up nicely for the next book in the series but doesn't bode well for Finn.

'Incinerator' is even darker than 'Crusher'.  There's lashings of blood and beatings and some bits are pretty grim for a YA book.  This is a crime thriller which will keep you on your toes and have you continually looking over your shoulder.  Niall Leonard has definitely conquered this corner of the market with his unique blend of gritty drama and suspense.