Cress by Marissa Meyer, published by Puffin on 6th February 2014

Goodreads synopsis:
In this third book in the bestselling Lunar Chronicles series, Cinder and Captain Thorne are fugitives on the run, with Scarlet and Wolf in tow. Together, they’re plotting to overthrow Queen Levana and her army.

Their best hope lies with Cress, who has been trapped on a satellite since childhood with only her netscreens as company. All that screen time has made Cress an excellent hacker—unfortunately, she’s just received orders from Levana to track down Cinder and her handsome accomplice.

When a daring rescue goes awry, the group is separated. Cress finally has her freedom, but it comes at a high price. Meanwhile, Queen Levana will let nothing stop her marriage to Emperor Kai. Cress, Scarlet, and Cinder may not have signed up to save the world, but they may be the only ones who can. 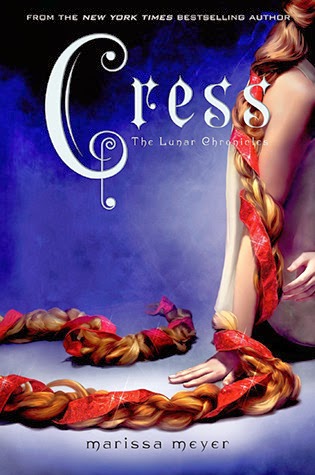 Review:
I love this series so much!  It's original, inventive, quirky, exciting and gripping and I adore Marissa Meyer's writing.  The whole concept for the series is unlike anything else I've come across before and starting each new book is such a treat that I always want to savour it as much as possible.  The only problem is that as soon as I've picked up one of Meyer's books, it's utterly impossible to put it down.  Case in point, 'Cress' which took over my life completely once I'd started it.  I couldn't concentrate on anything else apart from the story.

The third book in the Lunar Chronicles is loosely based on the fairy-tale of 'Rapunzel'.  I say loosely because as far as I can remember, Rapunzel was never stuck in a satellite for seven years orbiting the planet earth.  Cress has spent so long on her own that she has almost given up any hope of anyone coming to rescue her.  When she becomes embroiled in Cinder's quest to stop Queen Levana and sabotage her planned marriage, she is thrown into a whole new adventure with the dashing Captain Thorne by her side, but life on earth doesn't always turn out to be what she dreamt about during all those years alone.  I really loved Cress as a main character.  She can be quite timid and shy but I thought that only made some of her actions all the more impressive.  She demonstrates incredible bravery and strength throughout the story and I adored her relationship with Thorne, who she's in love with before they've even met.

The character viewpoint in the book is split predominantly between Cinder and Cress but also occasionally touches on Scarlet and Dr Erland.  This allows the reader to hurtle between our favourite heroines as they strive to defeat the evil Queen Levana.  I was sad not to see more of Scarlet and Wolf together, because I love them, but I'm fairly sure we'll get to share more of their story in the last book in the series.  One of the things I enjoy about these books, is the way that all the characters intersect with each other.  This is cleverly done and means that there's a whole host of new faces to meet, as well as some beloved favourites to revisit.

'Cress' weaves fantasy together with adventure and romance to create a thrilling story which gripped me from start to finish.  I thought the book was absolutely amazing and brilliantly constructed and I loved every second of it.  I'm looking forward to finding out what will happen in the concluding instalment of the series, 'Winter' but I really don't want the ride to ever come to an end.  This series is so, so good that you'll keep going back to pick these books up from your shelves to read over and over again.
Posted by Samantha (A Dream of Books) at 00:00