Darkness Falls by Cate Tiernan, published by Hodder and Stoughton on 13th September 2012

Goodreads synopsis:
Nastasya has lived for more than 400 years but things never get any easier. As she learns more about herself, she questions whether it will ever be possible to break free from the darkness of her former life. Can she turn away from the one person she wants to be with above all others? Should her past determine who she should - or should not - love? 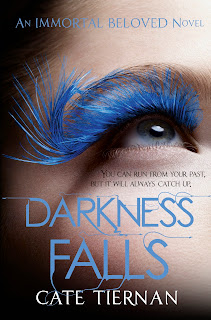 Review:
This is the second book in the Immortal Beloved series by Cate Tiernan and is just as good, if not better, than the first.

I was instantly plunged back into Natasya’s story as I began reading this book. She’s still trying to turn over a new leaf but she’s worried that her magick may always be dark and harmful to others.  She's also trying to deal with choices and decisions that she has made in her past and which she has to face and reflect on before she's fully able to move on.

After running from Incy for so long, we see Nasty getting sucked back into her old life. A large proportion of the story is focused on this and features a number of flashbacks which look at how they embraced their life together before Nasty finally opened her eyes to his true character. It was interesting finding out more about the enigmatic Incy but he’s definitely one of my least favourite characters so far.

Although I enjoyed seeing Nasty on her personal road to self-discovery, I actually couldn’t wait for her to return to River and co because I like the sense of community she feels when she’s with them. It was also pleasing to see how well-rounded her character is becoming under their influence. She’s really grown on me since the beginning of the series when I initially found her quite self-centred and I enjoyed seeing different facets of her personality change and develop.

I’m hoping that book three will have more of an emphasis on Nasty’s romantic relationship with Reyn. I’ve loved the idea of them as a couple from the first so I really want to see them explore further their feelings for each other.

‘Darkness Falls’ has an exciting, pulse-pounding climax and is so good that you won’t be able to put it down. Cate Tiernan is a master storyteller and I like the way she combines so many different elements into her books – magick, romance, danger, excitement, history and a character on an incredible journey towards a life of new promise.  If you haven't read this book yet then I would recommend grabbing yourself a copy immediately.
Posted by Samantha (A Dream of Books) at 00:00