Lance of Truth by Katherine Roberts, published by Templar on 1st October 2012

Goodreads synopsis:
The quest for Camelot's survival continues - King Arthur's secret daughter, Rhianna Pendragon, has faced mortal danger, ice-breathing dragons and dark magic to win Excalibur, the Sword of Light. But the sword is just one of four magical Lights that she must find to restore Arthur's soul to his body and bring him back to life. Now Rhianna must head into the wilds of the North, to find the second Light, the Lance of Truth, before her evil cousin Mordred claims it. But Mordred is holding her mother Guinevere captive - can Rhianna stay true to her quest for the Lights and save the mother she's never known, before Mordred wreaks his terrible revenge? 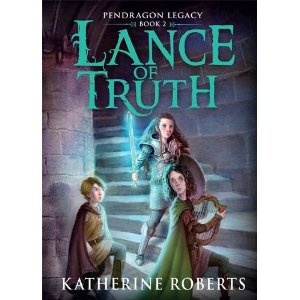 I love stories about Camelot, King Arthur and the Knights of the Round Table. I’m also a massive fan of the TV series Merlin so the Pendragon Legacy series by author Katherine Roberts is perfectly suited to my tastes. ‘Lance of Truth’ is the second in a planned four book series which combines elements of well known legends with a cleverly imagined tale of the long lost child of Arthur and Guinevere. This opens it up to a whole new audience who I’m sure will enjoy these stories as much as I did.

After Rhianna’s previous quest to find the Sword Excalibur, she now needs to prevent the Lance of Truth from falling into the hands of her evil cousin Mordred, as well as rescue her mother Guinevere who is being held captive. Helping her along the way are the Knights of the Round Table as well as her faithful friend Elphin. I was a bit disappointed that we didn’t see as much of Elphin as I would have liked. He’s one of my favourite characters and it seemed that their friendship although still vitally important to Rhianna, was slightly pushed to one side. I still have my fingers crossed that we might see a romance between them in the future but I guess I'll just have to wait and see!

There are some other great characters in this instalment. At long last we get to see the legendary Lancelot who didn’t turn out to be quite as I’d imagined, as well as Guinevere, who I enjoyed seeing more of. I thought the reconciliation between Guinevere and Rhianna was well written as the two struggle to adjust to their mother-daughter relationship.

Thrilling and exciting, this is a fantastic book which is a fast-paced read with plenty of twists and turns.  The plot fairly gallops along and there's danger around every corner.  The evil Mordred made me shiver every time he appeared and I was rooting for Rhianna the whole way through.

Book three is set to feature a new adventure to find the Crown of Dreams.  I’m looking forward to seeing what lies in wait for Rhianna next as she seeks to bring back her father King Arthur.
Posted by Samantha (A Dream of Books) at 00:00