Goodreads synopsis:
On Roanoke Island, the legend of the 114 people who mysteriously vanished from the Lost Colony hundreds of years ago is just an outdoor drama for the tourists, a story people tell. But when the island faces the sudden disappearance of 114 people now, an unlikely pair of 17-year-olds may be the only hope of bringing them back.

Miranda, a misfit girl from the island’s most infamous family, and Phillips, an exiled teen criminal who hears the voices of the dead, must dodge everyone from federal agents to long-dead alchemists as they work to uncover the secrets of the new Lost Colony. The one thing they can’t dodge is each other. 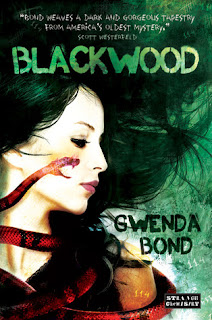 Review:
This was a magical and mystical debut by author Gwenda Bond. It reminded me of Shakespeare’s ‘The Tempest’ and not just because of the fact that the central protagonist is called Miranda and the action takes place on an island where mysterious events occur.

Featuring a Battlestar Galactica loving heroine and a teen who hears the voices of the dead, ‘Blackwood’ had me intrigued from the word go. Extremely unique and original, the story drew me in until I was just as immersed in the mystery of the island as all the characters.

The plot is inspired by Roanake Island’s history and a legend involving the disappearance of 114 people from the Lost Colony. I thought the meshing of elements of history with a modern day setting was really clever and the story was fresh and exciting. I had no idea what was going to happen but I had fun finding out!  The unpredictable nature of events in the book meant that I thoroughly enjoyed the element of surprise and read it expecting almost anything to happen.

Even when I put the briefly put the book down, I couldn't stop thinking about it.  As the story only takes place over a few days, there was a frantic feel about it with things quickly spiralling out of control and this lended itself nicely to the gripping and intense mood of the writing.

‘Blackwood’ is a terrific addition to the young-adult genre. Absolutely captivating, I loved not only the growing romance between misfits Miranda and Phillips but also the danger and intrigue of the events which unravelled on the island. The book was different to anything else I’ve read in recent months and Gwenda Bond is certainly an author I’ll be keeping my eye on.
Posted by Samantha (A Dream of Books) at 00:00