Review: The Masque of the Red Death - Bethany Griffin

The Masque of the Red Death by Bethany Griffin, published by Indigo on 2nd August 2012

Goodreads synopsis:
Everything is in ruins.  A devastating plague has decimated the population. And those who are left live in fear of catching it as the city crumbles to pieces around them.

So what does Araby Worth have to live for?

Nights in the Debauchery Club, beautiful dresses, glittery make-up . . . and tantalizing ways to forget it all.

But in the depths of the club—in the depths of her own despair—Araby will find more than oblivion. She will find Will, the terribly handsome proprietor of the club. And Elliott, the wickedly smart aristocrat. Neither boy is what he seems. Both have secrets. Everyone does.

And Araby may find something not just to live for, but to fight for—no matter what it costs her. 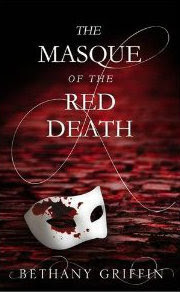 Review:
This book is based on an original work by Edgar Allan Poe, although when I read it I was unaware of the link.  Araby Worth is living amongst a city decimated by a terrible plague - a plague which robbed her of her twin brother.  As she tries to find oblivion at the infamous Debauchery Club, she stumbles into the path of a power struggle which is more dangerous than she could have ever imagined.

Bethany Griffin has created a terrifying world where people live in fear of catching the plague.  To protect themselves, those who can afford it wear masks which stop them from catching the deadly air born germs.  The startling imagery of citizens with porcelain masks on, hiding their true expressions and creating a lack of intimacy, is quite frightening and sinister.

The first person narrative from the perspective of Araby meant that I could feel the sense of loss which haunts her throughout the book but also the gradual blossoming of hope she experiences by the end and the sense of a new beginning being on the horizon.

I liked the love triangle between Araby, the darkly handsome and tattooed Will (who I loved) and Araby's friend's brother Elliott.  The latter never greatly appealed to me because although he showed glimpses of the good I didn't entirely trust him, whereas I adored Will almost immediately.

'The Masque of the Red Death' is a dark and seductive story with vivid and imaginative writing which immersed me from the very beginning.  I'm looking forward hugely to the sequel which is due out next year.
Posted by Samantha (A Dream of Books) at 00:00