Secrets, Lies and Locker 62 by Lil Chase, published by Quercus on 30th August 2012

Goodreads synopsis:
Secrets have a special home at Mount Selwyn High. For years, students have posted their deepest desires and fears in Locker 62. And then this locker is assigned to new girl Maya. She could use the knowledge to help people. Or she could use it to become popular. Maya, who was bullied, who has never been cool, who will do anything to be popular, is now the most powerful girl at school. What will she choose to do next? 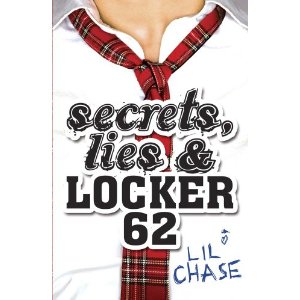 Review:
I really enjoyed Lil Chase's debut novel last year, 'Boys For Beginners' so I was pleased to have the opportunity to read and review her new book.  The premise sounded intriguing - a locker in a school which holds everyone's secrets and deepest thoughts and the new girl who finds that she holds immeasurable power over her peers when she's assigned the aforementioned locker 62.  Although I liked the general idea for the story, I'll admit that I had quite mixed feelings about it when I'd finished.

I liked the overall message that I think the story was trying to convey.  The fact that people aren't always who you think they are and that appearances can quite often be deceiving.  The main character Maya learns not to judge people until you've got to know them and that it's good to try and fit in but not at the cost of becoming someone you're not.

I also thought that Maya herself was great.  She starts out by trying to help people by guessing who the secrets belong to and then attempting to make their hopes and dreams come true.  Her intentions may be noble but along the way she's swayed by her longing to fit in and be part of the popular crowd.  This is something which I think most people have gone through at one time or another and I thought it was dealt with really well.

On the other hand, I wasn't so keen on the rather abrupt ending.  To be honest I thought that the story finished just as it was starting to get quite interesting.  There's a pretty major revelation near the end of the book which I felt was glossed over rather than being dealt with and explained in more detail.  It's also quite a big twist and I'm surprised that more fuss wasn't made about it.

'Secrets, Lies and Locker 62' was a quick and easy read but seemed a bit too predictable for my tastes.  It skirted over a really serious topic which I would have liked to have seen explored further and although I liked the main protagonist, I felt that some of the other characters were slightly one dimensional.  Overall a little disappointing considering how much I enjoyed 'Boys For Beginners'.
Posted by Samantha (A Dream of Books) at 00:00