Goodreads synopsis:
Up until three months ago, everything in sixteen-year-old Camelia's life had been fairly ordinary: decent grades; an okay relationship with her parents; and a pretty cool part-time job at the art studio downtown. But when Ben, the mysterious new guy, starts junior year at her high school, Camelia's life becomes anything but ordinary.

Rumored to be somehow responsible for his ex-girlfriend's accidental death, Ben is immediately ostracized by everyone on campus. Except for Camelia. She's reluctant to believe the rumors, even when her friends try to convince her otherwise. She's inexplicably drawn to Ben...and to his touch. But soon, Camelia is receiving eerie phone calls and strange packages with threatening notes. Ben insists she is in danger, and that he can help--but can he be trusted? She knows he's hiding something... but he's not the only one with a secret. 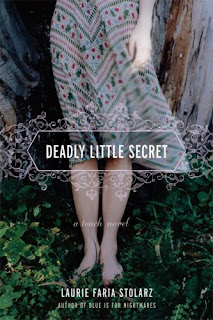 Review:
I wasn’t really sure what to expect from ‘Deadly Little Secret’ as I haven’t read anything by Laurie Faria Stolarz before and from reading the blurb I wasn’t completely certain what the story was going to be about.  However, the cover caught my eye and I like giving new authors a go so I picked this one up.  I’m glad I did because overall it was a great read and very similar in style and plot to Kimberly Derting’s ‘The Body Finder’ and ‘Desires of the Dead’ which I loved.


The main plotline concerns 16 year old Camelia, who becomes obsessed by new guy at school Ben, after he saves her from being hit by a car.  She’s desperate to find out more about him but when she does, she discovers that he left his last school after being suspected of having something to do with his ex-girlfriend’s death.  With everyone seemingly against Ben, she’s not sure if she can trust him but she just can’t stay away, particularly when he tells her that her life is in danger and only he can help her.
The chapters told from Camelia’s point of view are interspersed with those of an anonymous narrator.  These become steadily creepier and more sinister as the story progresses and although I had a couple of guesses about who I thought it could be, I was way off the mark and was very surprised when their true identity was revealed.

There's a sense of danger throughout the book which often had me on the edge of my seat and biting my fingernails down.  I enjoyed the way the mystery unravelled and the plot was engrossing and enjoyable.
I need to catch-up with these books as there are a further three titles in the series which I'm looking forward to reading soon. I want to know what is going to happen to all the characters next.
Posted by Samantha (A Dream of Books) at 00:00