Rage Within by Jeyn Roberts, published by Macmillan Children's Books on 30th August 2012

Goodreads synopsis:
After the earthquakes came the infectious rage, turning friends into deadly enemies. For survivors Michael, Aries, Mason and Clementine the battle to stay alive is about to get even tougher. The new world is organising itself, with camps that promise protection for the uninfected. But the reality of the sites is far more sinister. Besides, nobody is safe from the rage within their own soul... 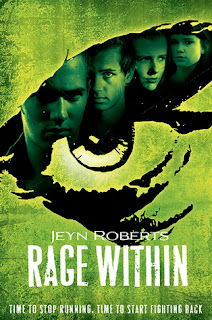 Review:
*There may be spoilers from the previous book in the series.

'Dark Inside' by Jeyn Roberts was one of my surprise hits of last year.  I absolutely adored it!  Dark and twisty, it blew my mind with it's sheet brilliance and I've been eagerly waiting for the sequel ever since.

'Rage Within' picks up from the first book by following main characters Michael, Aries, Mason and Clementine.  They are now tougher and more resilient than ever before and have experienced unimaginable horrors.  When we were first introduced to them they were scattered across the country but now they have found their way together with a small group of other survivors.  They aren't living though - they are only surviving.  Life isn't the same and has no resemblance to the existences they led before.  In reality, death is around every corner, the threat of the Baggers is uppermost in their minds and every day is designed simply around trying to stay alive.

I liked the way that each character had their own personal agenda but as a group they shared a common goal which brought them together.  The chapter perspective alternates between the four teens and I enjoyed getting to see more of their individual stories and as well as sharing their feelings about what they have seen and been forced to do.  I was pleased that we also got to find out more about the mysterious Daniel.  He has fascinated me from the start and I was intrigued to discover what his own motives were for some of his actions.

Whereas the setting of the first book was spread out over the whole country, the events of 'Rage Within' take place within quite a small circumference.  This made the atmosphere highly fraught with danger and added a sense of suffocation, as well as contrasting this with a fragile sense of safety and companionship.

There were some exciting revelations near the end of the story which turned things on their head completely and lots of twists and turns which kept me on edge throughout.  Now I need to know more as soon as humanely possible because I have so many questions!

This was a stunning sequel with everything you could want in a good book.  Terrifying, gripping and unbelievably exciting, I guarantee you won't be able to put it down.
Posted by Samantha (A Dream of Books) at 00:00