Goodreads synopsis:
When your average, 16-year old loser, Scott Tyler, meets the beautiful and mysterious Aubrey Jones, he learns he's not so average after all. He's a 'Shifter'. And that means he has the power to undo any decision he's ever made. At first, he thinks the power to shift is pretty cool. But as his world starts to unravel around him he realises that each time he uses his power, it has consequences; terrible unforeseen consequences. Shifting is going to get him killed. In a world where everything can change with a thought, Scott has to decide where he stands. 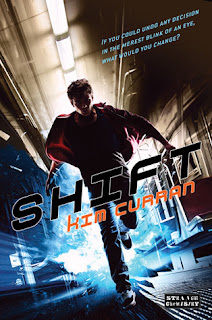 I loved the idea behind 'Shift' which is that certain teenagers have the ability to shift from one reality to another, where decisions can be changed, leading to different future paths.  Like the main character Scott, I thought that would be such a cool ability to have.  I mean imagine being able to right all those wrong choices with a single thought.

Very few young-adult books have male narrators so it was refreshing to see events unfold from the viewpoint of Scott Tyler, who unexpectedly discovers at the start of the story that he is a shifter.  His whole world is literally turned upside down by this revelation and nothing in his life will ever be the same again.  He meets lots of new people from here on in and one of the best is Aubrey who is smart and clever and explains to him the new life which now lies ahead of him.  In places I thought that the dialogue seemed a little stilted which sometimes made it difficult to connect with all the characters but many of them had grown on me by the end of the book.

I actually thought that the story initially started a bit slowly and I wasn't sure whether it was going to pick up.  Luckily it did and as the plot progressed, it got a lot more exciting with some unexpected (and on occasion quite grotesque!) surprises thrown in along the way.

I don't know if this is a stand-alone novel or not, but I'm guessing from the way it concluded that there will be a sequel.  It will be interesting to see where Kim Curran takes the story next as at this point she could take it in several different directions.
Posted by Samantha (A Dream of Books) at 00:00