I'm taking part in the blog tour today for 'Such Wicked Intent' by Kenneth Oppel.  I have a fantastic guest post from Ken about the process he went through to adapt such a well-loved classic. 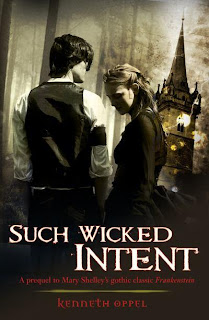 Frankenstein is one of my favourite novels, and I wish I’d written it. Unfortunately, it was written two hundred years ago by a 19-year old genius called Mary Shelley. Arguably, Frankenstein is the first science fiction novel, the first monster novel, the first horror novel. Not only is it an incredibly gripping read but, like all the best literature, it tackles weighty themes: reckless human ambition, the ethical implications of scientific pursuit, the creator’s responsibilities to his creations, and the perils of really, really bad parenting. All things that are still relevant today.

A couple of years ago, while re-reading the novel, I was struck by how quickly Victor Frankenstein’s youth is described – and one line in particular stuck out: “No youth could have passed more happily than mine.” Now, remember that this is a kid who goes on to dig up corpses, chop them up, sew the body parts back together, jolt them with electricity in the hopes of revivifying them, and creating life from death. Doesn’t sound like a very happy youth to me. What might have happened to Victor to lead him to become the “mad scientist” we all know? That, I thought, would make an interesting story.

A few pages later, Shelley goes on to give a helpful clue: “I entered with the greatest diligence into the search for… the elixir of life…. What glory would attend the discovery, if I could banish disease from the human frame, and render man invulnerable to any but a violent death!”

Right away I had an image of a teenager who was curious, ambitious, possibly arrogant, but also adventurous and brave. The search for an elixir of life, while perhaps not the activity of a perfectly well-adjusted kid, would make for an excellent quest. But it seemed to me there had to be something more behind it. What if Victor needed the elixir for a personal purpose? Was he himself ill? Or maybe a friend, parent – or a beloved sibling?

And so, in my alternative Frankenstein mythology, I decided that Victor Frankenstein had a twin brother, Konrad -- who has an entirely different personality, and is a much steadier sort than Victor -- and just that much better at everything.

In writing the book, I tried to stay true to the tone of Mary Shelley’s. It’s very overwrought and gothic and histrionic, which is great fun to write. The language is a joy to mimic, though I wanted to make sure I didn’t make it too dense in case it alienated modern teens.

It was tremendous fun to learn about the real Mary Shelley and her sources for Frankenstein. I’m sure plenty of my readers will pick up on all the references to the real Mary Shelley and the fascinating and tragedy-filled life she led. From my point of view, all this material was source material for me. I used Mary Shelley’s family as a basis for Victor’s – and stole characteristics from her husband (Percy Shelley) and friend Lord Byron to build Victor’s personality and backstory. When you’re reimagining a literary classic, you want to preserve the tone of the original, and this was one way I could do it.

So I’m very grateful to Mary Shelley for writing Frankenstein, and especially grateful to her for being dead long enough that she can’t sue me for what I’ve done with her characters and story!
Posted by Samantha (A Dream of Books) at 00:00