Goodreads synopsis:
When sixteen-year-old Maude runs away to Paris, her romantic dreams vanish as quickly as her savings. Increasingly desperate for money, she answers a mysterious advert: 'Young Women Wanted for Undemanding Work. Apply In Person To The Durandeau Agency.' But the work is very strange indeed. Maude discovers she is to be a repoussoir - an ugly young woman hired by Parisian socialites to enhance their beauty.

Maude is humiliated - but faced with destitution, what choice does she have? Quickly (and secretly) selected as the perfect companion for the Countess Dubern's daughter Isabelle, Maude is thrown into a decadent world full of parties, glamour and astonishing cruelty. Maude finds that academic Isabelle is equally disenchanted with the Parisian social scene, and the girls form a tight bond. But when bohemian artist Paul and the handsome Duke d'Avaray are introduced into the girls' lives, their friendship will be tested to its limits. The girls are about to discover the true meaning of being beautiful... 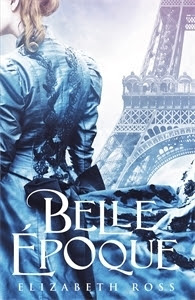 Review:
Elizabeth Ross was inspired to write 'Belle Epoque' after reading Emile Zola's short story Les Repoussoirs.  I found this fascinating because not only am I a huge fan of Zola's work but also the idea of young women being used as beauty foils was a really interesting concept.  I was looking forward to seeing how Ross was going to treat this unusual subject.

'Belle Epoque' is set in Paris, France in 1888.  The Eiffel Tower is currently being constructed and has divided the opinion of the French people, some of whom admire the ambition and architecture and others who abhor it.  This nicely mirrors one of the themes of the book - beauty and the fact that beauty is often subjective and in the eye of the beholder.

The main character Maude is a repoussoir.  She is hired by Countess Dubern to make her daughter Isabelle look more beautiful and attractive to prospective suitors.  Maude plays her part reluctantly and dreams of something more for herself.  She struggles with the idea that she is a mere accessory to Isabelle, someone who will constantly be overlooked and strives to carve out a real future for herself.  She is often torn between her duty to her employer and her growing friendship with Isabelle who does not know the truth about her.  I enjoyed Maude's development throughout the novel and how she grew as an individual.  She has to face adversity but she always attempts to hold her head up high and do what she believes in, even when it often makes things harder for herself.

My only real criticism of the book is that I thought the sub-plot involving Paul the musician, was almost a distraction to the main story.  I can see why the author incorporated it but personally, I preferred it when the focus was on Maude's relationships with some of the other female figures in the plot.

Ross's debut novel is a treat to read.  Her writing is sophisticated and her characters beautifully crafted.  I enjoyed the way she explored the concept of beauty and what it really is and I was pleasantly surprised by just how mush I enjoyed this excellent book.