Linked by Imogen Howson, published by Quercus on 1st August 2013

Goodreads synopsis:
For years, Elissa has suffered nightmarish visions and unexplained bruises. Finally, she's promised a cure, and an operation is scheduled. But on the eve of the procedure, Elissa discovers the truth: she's seeing the world through another girl's eyes. A world filled with wires, machines and pain. Elissa follows her visions, only to find a battered, broken girl. A girl who looks exactly like her. A twin she never knew existed. Elissa and her twin Lin go on the run, but even after changing their looks and clothes, they're barely a step ahead of the government agents who are ruthlessly tracking them down. For Lin and Elissa are too valuable to let go, and the dark truth at the heart of it all is too shocking to risk exposing... 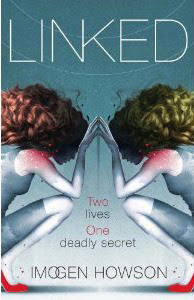 Review:
I had such high hopes for this book.  Described as The Bourne Identity meets Inception, the tagline alone was more than enough to get me counting down the days until the release date.  I really thought it had the potential to be amazing and promised so much but for me, in the end, it failed to deliver everything I was expecting.  It had inter-planetary space travel, mid-air skirmishes, government conspiracies and much more.  It ticked so many boxes but overall I felt like the story just fell flat.  I think partly because of my lack of connection with the characters, particularly the main protagonist Elissa.

There were hints of romance throughout between Elissa and her brother's best friend Cadan, but even that didn't interest or intrigue me enough to get me excited about the book.  The other prominent relationship is between Elissa and her twin, something which I was looking forward to seeing develop.  I didn't however feel the closeness of their bond and although I liked Lin, I would have enjoyed seeing events more from her perspective.

I don't want to reveal any specific details about the plot because it would spoil it completely to even hint at what actually happens but I do want to say that it started so well with the opening couple of chapters completely hooking me in, but lost me about a third of the way through and from that point onwards I struggled to stay invested in the story.

I wanted to love this book so much but overall it didn't have me flipping the pages as madly as I should have done.  I have however, read plenty of positive reviews of this title so if it intrigues you in any way then I would still suggest giving it a try.

Although I had initially thought that this was a stand-alone, it does have a sequel and 'Unravel' is due to be published by Quercus in summer 2014.
Posted by Samantha (A Dream of Books) at 00:00