The Elites by Natasha Ngan, published by Hot Key Books on 5th September 2013

Goodreads synopsis:
Hundreds of years into the future, wars, riots, resource crises and rising sea-levels have destroyed the old civilisations. Only one city has survived: Neo-Babel, a city full of cultures – and racial tension.

Fifteen-year-old Silver is an Elite, a citizen of Neo-Babel chosen to guard the city due to her superior DNA. She’d never dream of leaving – but then she fails to prevent the assassination of Neo Babel’s president, setting off a chain of events more shocking and devastating than she could ever have imagined. Forced to flee the city with her best friend Butterfly (a boy with genetically-enhanced wings), Silver will have to fight to find her family, uncover the truth about Neo-Babel and come to terms with her complicated feelings for Butterfly. 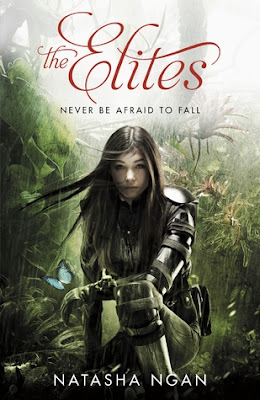 Review:
'The Elites' is 23 year old Natasha Ngan's first book and is a hugely impressive debut.  I'd heard a lot of buzz about it prior to publication so I couldn't wait to get my hands on a copy and delve into the incredible world that Natasha has created.

The story takes place against the backdrop of the city of Neo-Babel, which is still standing after the wars and destruction that destroyed everything else around them.  It features two unusual characters Silver and Butterfly who are two of The Elites, chosen to protect the city because of their exceptional DNA.  The Elites are the fastest, the most intelligent and the most adept and it's a role that carries great prestige and honour.  After a series of events and the abduction of Silver's parents, the two friends discover a dangerous truth about Neo-Babel that changes their whole future and makes them question everything they have always believed in.

I loved the friendship between Silver and Butterfly.  I could tell immediately that they would always look out for each other and that really came across in the story when they each find themselves in some difficult situations.  Their relationship is pivotal to the book but does begin to evolve half-way through.  Personally, I wasn't too keen on this but I may still change my mind.

This book has been compared to 'The Hunger Games' but I actually think it's very different to that series.  I would say it leans more heavily towards the fantasy genre.  It has an unusual cast of characters, a unique backdrop and a story with true heart, which all combine to make this an amazing read.  There is no doubt in my mind that this is a stunning debut that I'm sure readers will adore.