Goodreads synopsis:
For Briar Rose, life is anything but a fairy tale. She's stuck in a small town in deepest Georgia with parents who won't let her out of their sight, a bunch of small-minded, gossiping neighbours and an evil ex who's spreading nasty rumours about what she may or may not have done in the back of his car. She's tired of it all, so when, on her sixteenth birthday, her parents tell her that she is cursed and will go to sleep for a hundred years when the clock strikes midnight, she's actually kind of glad to leave it all behind. She says her goodbyes, lies down, and closes her eyes . . . And then she wakes up. Cold, alone and in the middle of the darkest, most twisted fairy tale she could ever have dreamed of. Now Briar must fight her way out of the story that has been created for her, but she can't do it alone. She never believed in handsome princes, but now she's met one her only chance is to put her life in his hands, or there will be no happy ever after and no waking up. 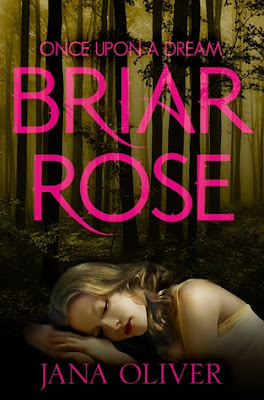 Review:
'Briar Rose' is a southern retelling of the fairy tale of Sleeping Beauty. It's about a young girl who on her sixteenth birthday is doomed by a curse which threatens to rob her of everything she holds dear unless she can find a way to break it.

I thought I was going to love this book.  I'm a massive fan of Jana Oliver's previous series The Demon Trapper's Daughter and I couldn't wait to read this as soon as I first heard about it.  The plot sounded brilliant, I love fairy tale retellings and I fell in awe of the book cover but I'm disappointed to say that the actual story I really struggled with.  I normally finish books quite quickly but this one took me over a week to read, a sign that I just wasn't hooked by the actual telling of the tale.

It's quite an unconventional retelling and actually bared very little resemblance to the traditional version of Sleeping Beauty. The blurb of the book therefore seemed to be slightly misleading.  I wouldn't necessarily have minded this if the story had been amazing but for the most part I often found it strange and confusing, particularly when Briar enters the dream world.  Nothing here is familiar and everything seems foreign and dangerous.

I thought that the romance in the story would perhaps have redeemed things for me but unfortunately I wasn't won over either by the bond between Briar and her childhood friend Joshua.  As individual characters they were okay but together I didn't feel the spark between them.  I actually preferred the scenes between Briar's best friend Reena who tries to help her and a local boy called Pat who also finds himself pulled into the dream world.

I'm sad to say that this book just wasn't for me although I kept on hoping until the very end that something would happen to turn it around for me.  Regardless of this, I'm still a huge fan of Oliver's work and I will certainly be reading more by her in the future.