Split Second by Sophie McKenzie, published by Simon and Schuster on 12th September 2013

Goodreads synopsis:
Bound together by the devastating consequences of a terrorist attack on a London market, teenagers Charlotte (Charlie) and Nat appear at first to have much in common. But, as Charlie gets closer to Nat and his family, she begins to wonder if perhaps he knows more about the attack than he has let on. 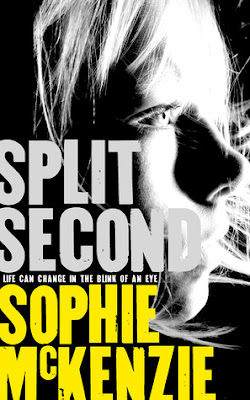 Review:
Sophie McKenzie is one of my favourite British authors and 'Split Second' is one of the best books I've read by her so far.  It had an extremely engaging narrative which thoroughly immersed me in the story.  I finished this book in one sitting and found it utterly gripping.

McKenzie has cleverly taken themes which are relevant today and woven them into the book.  For example, the age of austerity, budget cuts and unemployment all factor but she has imagined what would happen in the future if these things all spiralled out of control.  How would the government respond to societal unrest?  What extent would people go to in ensuring they could feed their families? These questions and more are all subtly posed to the reader who is left to make their own minds up about the ethics of some of the characters' actions.

The story is told through a dual narrative, featuring teenagers Nat and Charlie.  Their lives become entwined following a shocking turn of events which occurs at the start of the book.  This ensures that they will be brought together but I had no idea how entangled they were going to become with each other as they both struggle to right a series of terrible wrongs.  They become involved with a secret organisation which they believe wants to help stop a radical group from spreading terror across the UK.  As the fast-paced plot unravels, it turns out that they have no idea what truths have really been kept from them but they are about to find out.

The book provides a frankly terrifying vision of the future of society and is not for the faint-hearted.  Sophie McKenzie has written a superbly exciting story which I feel will appeal hugely to both a male and female readership.  The sequel will be published in 2014 and will be entitled 'Every Second Counts'.
Posted by Samantha (A Dream of Books) at 00:00