Breathe by Abbi Glines, published by Simon and Schuster on 29th August 2013

Goodreads synopsis:
Sadie White's summer job isn't going to be on the beach life-guarding or working at rental booths like most kids her age. With her single mother's increasing pregnancy and refusal to work, Sadie has to take over her mother's job as a domestic servant for one of the wealthy summer families on a nearby island.

When the family arrives at their summer getaway, Sadie is surprised to learn that the owner of the house is Jax Stone, one of the hottest teen rockers in the world. If Sadie hadn't spent her life raising her mother and taking care of the house she might have been normal enough to be excited about working for a rock star.

Even though Sadie isn't impressed by Jax's fame, he is drawn to her. Everything about Sadie fascinates Jax but he fights his attraction. Relationships never work in his world and as badly as he wants Sadie, he believes she deserves more. By the end of the summer, Jax discovers he can't breathe without Sadie. 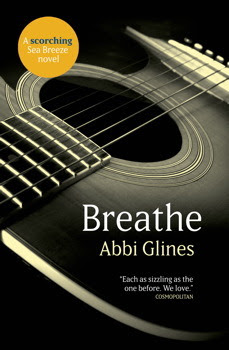 Review:
This is the first book in the Sea Breeze series by Abbi Glines.  I've actually already read all of the other titles so it was slightly strange going back to the beginning with this one.  It didn't really matter too much because the stories can be read out of order but it was interesting to see how Abbi's writing has changed as the series has progressed.

'Breathe' follows local girl Sadie who goes to work in rock star Jax Stone's house for the summer.  She has grown up having to be ultra responsible with a single parent mother who is now pregnant and dependant on Sadie to look after them and earn some money.  I enjoyed seeing Jax and Sadie's burgeoning romance unfold.  He seems to be his true self when he's around her and while her innocence is just what he needs, she benefits from some of his experience too.  One of the things I love about Abbi Gline's couples is the way in which they really do seem to complete each other.  Separately they are still great individuals but together they look like they can achieve anything.

I also love seeing how two people who seem like polar opposites and come from very different social circles can be brought together.  Jax may be a famous and ridiculously wealthy music star who appears to have everything he could ever want, but when he meets Sadie everything else fades away and to him, she is the only thing that matters.

I am a humongous fan of Abbi Glines and I will read literally anything she writes.  I hope there are many more of her books still to come because for stories with lashings of romance, heart and soul there's only one author who can deliver.
Posted by Samantha (A Dream of Books) at 00:00