Twisted Perfection by Abbi Glines, published by Simon and Schuster on 29th August 2013

Goodreads synopsis:
Della Sloane is not your average girl. Yearning to break free of her dark and sheltered past, Della plans a solo road trip to experience real life on her own terms. But the trip is nearly cut short in the little beach town of Rosemary when she realizes she can't even pump her own gas-until Woods Kerrington shows up, more than willing to help out a pretty girl in need.

Woods's family wants him to settle down with a wealthy woman in pearls, but he can't resist this carefree girl in cutoffs passing through town. A one-night stand should have been enough, but months later, Woods can't get the irresistible Della out of his head.

When a twist of fate brings Della back to Woods, all signs point to trouble if they don't keep their distance. Neither is truly free, and a relationship could destroy both of them. With their hearts on the line, Della thinks the safest bet is to walk away. But Woods isn't about to let that happen… 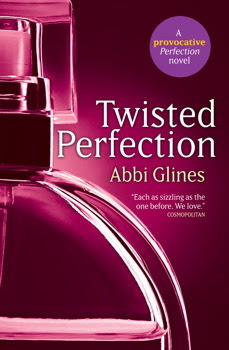 Review:
I can't get enough of Abbi Glines' books!  She is the Queen of New Adult fiction and her books are always hot, steamy and totally absorbing.  I'm so happy that Simon and Schuster are publishing so many of her titles in print at the moment because they are sooo good.

'Twisted Perfection' focuses on Woods Kerrington, who was first introduced to readers in the Fallen Too Far series.  Woods had actually already charmed me so I couldn't wait for him to get his own story.  I knew snippets about what was going to happen but I was excited to discover more about him and the girl who was set to steal his heart.  The girl in question is Della Sloane who has emotional issues and secrets in her past.  She has a lot to overcome but when she and Woods are together they become an explosive combination.

Emotion oozes out of the pages of this book which I could not put down.  There are highs and lows for the characters and I felt like I was with them every step of the way.  Things don't always work out as you would expect and both Della and Woods have obstacles to face but I never gave up hoping that they could find a way to be together.

Each of Abbi's books seem to introduce a new character who I end up fascinated by.  This time it was Tripp who appears at various interludes throughout the story.  I wonder if he will eventually get his own spin-off because I definitely found him more than intriguing.  I also love how all the characters from earlier stories end up dipping in and out of each others lives as well, so we get to see how they're getting on.

I want to live in Rosemary where the guys are hot, the romance sizzles and the sun never stops shining!